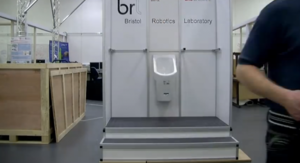 People around the world produce an estimated 6.4 trillion litres of urine every year. BRL, a collaboration between the University of Bristol and the University of the West of England, want to make the most of this abundant resource. At the core of urine-tricity are microbial fuel cells (MFCs), which contain live microbes. When urine flows through an MFC the microbes consume it as part of their normal metabolic process. This, in turn, frees electrons. Electrodes within the cell gather these electrons and when they are connected to an external circuit a current is generated.

It is early days, but the work—which is being supported by a number of organisations, including the Gates Foundation—shows that urine could have the potential to make a significant contribution to renewable energy. It might also provide a commercial incentive to build more toilets—over 2.5 billion people around the world have no access to proper sanitation.

There’s money in them thar ‘nals.

9 thoughts on “Looking After Number One”