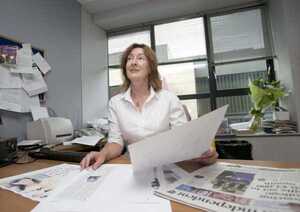 Claire Grady on the day of her appointment as first female editor of the Irish Independent, August 12,  2013

Editor of the Irish Independent, and former Editor of The Herald, Claire Grady has announced that she has decided to step down from her role and is leaving INM with immediate effect.

….Although the motion passed by the Independent Newspapers’ NUJ chapel does not formally express disapproval at her enforced departure, it “notes” Grady’s “resignation… with disappointment”.
The warmth of their backing for Grady implies that they are upset at her being required to leave after just one year as editor.
Two people familiar with the situation at the Indo say that Grady was never allowed to edit as she would have wished due to interference by the editor-in-chief, Stephen Rae. “He made her life hell,” said one.
Some of the staff resent attempts by the management of Independent News & Media (INM) to scapegoat her for the paper’s drop in circulation.