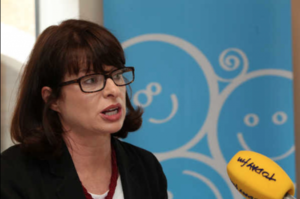 Outgoing Children’s Ombudsman Emily Logan has published her final annual report this morning, which shows there was an 16% increase in complaints in 2013, compared to 2012. 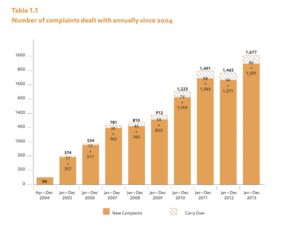 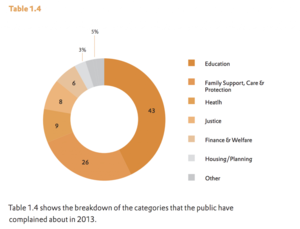 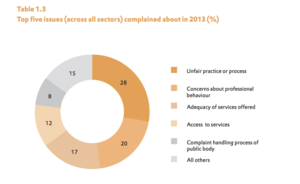 In relation to one particular complaint, Ms Logan’s report explains how the State could not find a school to take one child – who was a separated child seeking asylum and aged 13 at the time – for two years.

[Office of the Children’s Ombudsman] received a complaint from a Guardian ad Litem (GAL) regarding education provision for a separated child seeking asylum. The child who was then aged 13, had been permanently excluded from school. Despite applications to almost 30 schools in a wide catchment area by the National Education and Welfare Board (NEWB) and the child’s social worker as well as one unsuccessful Section 29 appeal, a school place could not be secured.

The Department sanctioned nine hours per week Home Tuition (according to the DES Circular M29/95 the minimum number of instruction hours per week in post-primary school is 28) for the child throughout this period. The GAL contended that the Department failed in its responsibility to provide a school place for the child and that this involuntary exclusion from school had an adverse impact on their social and academic development.

The child was given a school place after two years outside the system and is reported to be progressing well after a difficult start.

In relation to asylum seekers in general, Ms Logan states:

I would like to use this opportunity to once again raise an ongoing issue of concern for me regarding the exclusion to my investigatory remit in the area of asylum and immigration. The Department of Justice and Equality and my Office do not have a shared understanding of the scope of this exclusion, particularly as it relates to children in direct provision.

I have raised this with the Oireachtas on numerous occasions dating back to my first annual report. In March 2012, my Office submitted a detailed report on the operation of the Ombudsman for Children Act 2002 to the Oireachtas and to the Minister for Children
and Youth Affairs. This report contained a detailed recommendation for amending the 2002 Act to clarify the role of the OCO in relation to complaints relating to asylum and immigration matters.

Notwithstanding the lack of clarity regarding its jurisdiction, the OCO has dealt with complaints brought to its attention concerning children living in direct provision. The OCO has sought and obtained a resolution to complaints brought to the Office in the interests of the children in question, though the Department of Justice and Equality has not accepted that the OCO can address these as cases within the statutory complaints-handling framework of the Ombudsman for Children Act.

Meanwhile, from the launch…

Asked if there’s anything in modern day Ireland that might cause a State apology in future, @childrensombuds mentions Direct Provision