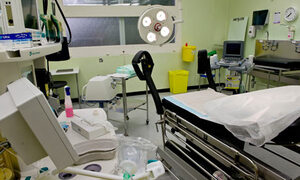 When she had her 20 week scan In January, she discovered her son, Christopher Denis, had complications that were incompatible with life.

She spoke with Jonathan Healy of Lunchtime on Newstalk.

Rebecca: “We were given the options and told that basically the baby wouldn’t survive outside the womb and if he did – we didn’t even know it was a boy at the time – he could live for three seconds he could just take one breath and not come back from that breath or live for 3 minutes…. We could terminate or continue with the pregnancy… So the next day myself and my husband made the decision to terminate because the baby had no chance… Because I was so far gone you know, my time was running out basically to go to England … so from that day then I only had ten days left to make this, from that day to actually book in to go to Liverpool it took us 10 days.”

Jonathan Healy: “This was January 2014… so you would have been aware of all the discussion that had gone on about fatal foetal abnormality and the decision in the X case and the court case and all that and you would have listened to that not knowing you were going to find yourself in that position?”

Healy: “And the decision to go for the termination? How difficult was that for you and your husband?”

Rebecca: “It’s so difficult. Myself and my husband were awake all night and you know itt’s just so difficult, you’d never think you’d be faced by this ever. And it’s not something you take lightly, you know, I’m totally against abortion… but termination for medical reasons is totally different but the other thing I’m totally against that even though we’ve been through this ourselves but that decision is one of the hardest decisions that any mother has to make. The hardest thing for me is making that decision knowing that my little baby was still kicking inside and you know, no mother should have to do that.”

Healy: “How else did the medical system deal with you here, because you were left with no choice…?

Rebecca: “I suppose the nurse’s hands are tied, they can’t do anything for you they can only advise you on what to do and that’s basically down to the law because it’s illegal, They can steer you in the direction of who to contact but that’s it they can’t do anything else for you. So basically you come out of the hospital after being given this information, that doctor in England doesn’t just take this on lightly they have to get your medical records and if they think your baby is going to survive they don’t do the procedure.”

Healy: “Yourself and your husband headed off to Liverpool. And when you got there you were going over on a flight presumably with people who were going away for the weekend?

Rebecca: “Crazy. There’s girls going on hen weekends and they’re all having their fun and rightly so and you’re sitting there and there are awful things going through your mind, you get off that plane then and you’re rushing to the hospital even the taximan trying to make small talk with you… they kind of know what you’re going for but it’s the most horrific journey I’ve ever had to take in my life. We were in Liverpool for football matches but this has totally changed for us I don’t think we could go to Liverpool again and not think why we were there the last time.”

Healy: “When did you find out the baby was a boy?”

Rebecca: “We actually found out when the doctor in Liverpool done the scan. Even when we got to Liverpool then and she was doing the scan she actually found there were more things wrong with Christopher Denis than actually thought. So he would have no chance…no chance at all.”

Healy: “So you have the termination and what happens then to an Irish woman in the Liverpool hospital who’s had that termination because, you know there are relatively swift procedures. How long did you stay in the hospital?”

Rebecca: “I was in the hospital, we got there on the 21st I think it was a Monday a Tuesday I think it was and it was 9.30 in the morning so basically I didn’t have Christopher Denis then I had him into the Wed morning on the 22nd. It’s not a procedure that is done straight away, you still have to have the baby, go through the labour process and the whole thing. I think people think you’re just brought in and it’s done straight away, it’s not.”

Healy: “And you couldn’t do that in this country.”

Rebecca: “Couldn’t do that in this country no. So my baby was born in Britain. I had to go to another country for my, I must say, much-wanted baby. We planned our baby and everything and it didn’t happen for us that way so we had to go to England to have our baby.”

Rebecca: “Yes we got to hold him yes. We had Christopher Denis for 19 and half hours. So I had him at 2.15 into the Wednesday morning so we had to head back home that day.”

Healy: “So could you bring Christopher Denis with you?”

Rebecca: “No We had to leave our baby there as well.”

Healy: “And why was that Rebecca?”

Rebecca: “Because basically we wanted to have a post-mortem and I suppose whether to see for us to start a family again because us not knowing what was wrong with Christopher Dennis we needed the post-mortem. We had him on 22nd January we didn’t get our baby back until the 5th March.”

Healy: “So you would have gone home on the flight with the hen nights… and how did Christopher Denis come home.”

Rebecca: “Christopher Denis came home unfortunately in a little box delivered by TNT. You know when you have your baby all the balloons in the house…there was none of that. This is I don’t know the worst pain you can ever feel in your life. Myself and my husband never got to see the baby. The grandparents never got to see the baby. We have lovely photographs and everything of our baby but that’s all we have. Now I still have my baby at home, he comes to bed with his mammy and daddy every night but that’s how he came home. People don’t realise that how your baby is coming home. Your baby is coming home in a box.”

The ‘You Don’t Own Me’ Song

28 thoughts on ““Couldn’t Do That in This Country No’”