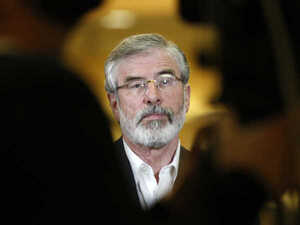 ….After the pogroms of 1969, Internment in 1971 and Bloody Sunday in 1972 the vast majority of nationalists withdrew any consent to be governed from the Northern state, it’s institutions and agencies.

The conflict itself caused widespread hurt and suffering, but so too did the absence of the structures and institutions which are the norm in peaceful, democratic societies. These citizens never had a policing service. Policing and the Legal process were subverted to the primary objective of defeating republicanism at all costs. The RUC was a quasi-military arm of the state which acted against nationalists and republicans as if we were the enemy.

In many cases the absence of a civic police service also disconnected alienated communities from the support of social services. These communities policed themselves. The vast majority of people were law abiding and decent. Strong and empowered and progressive communities emerged. New and innovative restorative justice systems were developed as part of this collective experience. But there was also, particularly in the first two decades of the conflict a more brutal form of rough justice.

Some journalists and political opponents of Sinn Féin continue to perpetuate a particular myth about life in nationalist areas of the North during the conflict. They portray republicans as having oppressed republican/nationalist communities through political control and vigilantism. This was never the case. The IRA could never have sustained itself without popular support and Sinn Féin would not have developed as we have unless we had the support of the people.

The reality of course is that a professional, accountable and impartial policing service was absent and unattainable in a society that was manifestly unjust. In many republican areas the community put pressure on the IRA – which sprang from and was sustained by the community – to fill this policing vacuum.

The IRA itself often viewed this role as a major distraction from its central function. It suspected that the RUC indulged criminals in order to tie down IRA resources and demoralise the nationalist community.

IRA ‘policing’ was most evident in those areas where it had strongest support. The bulk of this activity involved mediation between those in dispute, and went unreported.

Despite the high standards and decency of the vast majority of IRA volunteers, IRA personnel were singularly ill-equipped to deal with these matters. This included very sensitive areas such as responding to demands to take action against rapists and child abusers. The IRA on occasion shot alleged sex offenders or expelled them.

While this may have been expedient at the time it was not appropriate. Victims were left without the necessary social service support and abusers without supervision. It ultimately failed victims and the community alike. That is a matter of profound regret for me, and many other republicans.

But these actions were of their time and reflected not only a community at war but also an attitude within Ireland which did not then understand or know as we now do, how deeply embedded abuse is in our society.

For decades the institutions of both states including successive governments, the RUC, An Garda Siochana, the courts, social services, churches and others did not deal with these matters properly.

Many senior republicans, including me, had major issues with the IRA acting as a policing agency. Martin McGuinness and I are on the public record speaking out against punishment shootings since the 1980s.

This facet of IRA activity was gradually discontinued over a long period as republican activism evolved despite sizeable and understandable opposition in some communities, which were contending with a Loyalist murder campaign alongside British military aggression and ingrained disadvantage and discrimination. They had little patience for anti-social behaviour, drug pushers, death drivers or sexual abusers.

Despite the alienation from the RUC it was the accepted de facto practice that they dealt with traffic accidents, car insurance and such matters. Incidents of rape were also reported to them in some cases and no thinking person would have made a case against that. But many victims or families of victims were reluctant to bring cases of child abuse forward. This was part of the larger problem all society and particularly victims faced at that time. But where a case emerged there was the added problem for some about reporting this to the RUC. They wanted the community or the IRA to take actions.

As society became better informed as to the issue and handling of abuse, republicans began to develop victim centred approaches, ensuring that victims received the necessary supports, counselling and advice.

Following the IRA cessation in 1994 and the developing peace process legacy cases of abuse emerged. Many of these are in the public domain. Some involved republicans. My father was an abuser. Some also may have involved IRA volunteers. Those who wish to have these cases dealt with have that right.

The recent publicity surrounding the case of Maíria Cahill has brought this particular issue to the fore in public consciousness. Maíria alleges she was raped, and that the IRA conducted an investigation into this. The IRA has long since left the scene so there is no corporate way of verifying this but it must be pointed out that this allegation was subject to a police investigation, charges were brought against some republicans who strenuously denied Maíria’s allegations. They insist they tried to help her. They were all acquitted by the court.

Maíria has also accused Sinn Féin and me of engaging in a cover up. That is untrue. When I learned of the allegation that Maíria was the victim of rape I asked her grand-uncle Joe Cahill, a senior and widely respected republican, to advise her to go to the RUC. He did this but Maíria did not want to do so at that time.

When Maíria subsequently did go to the police, I co-operated with the police investigation.

Any of the other Sinn Féin representatives named by Maíria have assured me that they at all times sought to support and help her. They advised on counselling, on speaking to her own family or approaching social services or the police. The people she spoke to are decent, thoughtful citizens and compassionate people. There was absolutely no cover up by Sinn Féin at any level.

Sinn Féin has robust party guidelines and processes on the issues of child protection, allegations of sexual abuse and/or sexual harassment, which were adopted by An Ard Chomhairle in 2006 in line with changes to the law.

Sinn Féin adopted New Child Protection Guidelines in 2010, which were produced in consultation with the HSE and Social Services and the PSNI.

Maíria has said that there are other victims who are living in fear, and perpetrators at large who are a danger to children at this time, as a result of how republicans dealt with these issues in the past.

No one should be living in fear and no child should be at risk.

Anyone who has any information whatsoever about any child abuse should come forward to the authorities North or South and they will have the full support of Sinn Féin in so doing.

That includes Maíria Cahill, who says that there are perpetrators at large who are a danger to children at this time. Whatever information she has on this she should give to the appropriate authority.

Healing and rebuilding a society still emerging from conflict demands that many difficult issues will need to be faced up to and dealt with as a necessary part of putting the past behind us.

That will require a huge amount of courage, compassion and humility across our society.

How Republicans dealt with the issue of child abuse should be one of these issues, if that is what victims want. Sinn Féin will accept our responsibility in contributing to the resolution of these wrongs. We are committed to creating a society which is no longer bedevilled or haunted by the legacy of any harm or injustices. Sexual abuse is a challenge which still challenges all sections of modern Irish society.

Looking after all victims and their families is a significant and important part of building a peaceful and just society. And victims include a wider category than those killed or injured as a result of armed actions by any of the protagonists.

It includes those who were brutalised or had their lives limited or adversely affected by growing up in a society scarred by war and the absence of agreed, stable, democratic structures and institutions.

How republicans dealt with allegations of child abuse (Gerry Adams)

55 thoughts on “Police, Judge And Executioner”