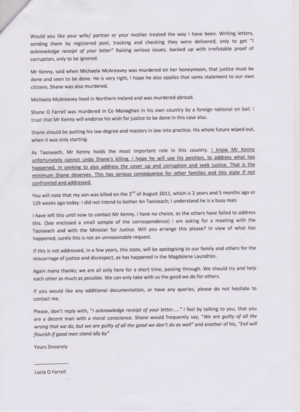 A letter sent in January 2014, by Lucia O’Farrell to Nick Reddy, private secretary to Taoiseach Enda Kenny, requesting a meeting with Mr Kenny

Lucia O’Farrell, mother of Shane O’Farrell, has repeatedly requested a meeting with Taoiseach Enda Kenny, to no avail.

Shane, then 23, was killed in a hit-and-run in Carrickmacross, Co. Monaghan by Zigimantus Gridziuska, from Lithuania, on August 2, 2011. Gridziuska’s was on bail at the time.

An hour before Shane was killed, the Garda Drugs Squad pulled over the car that Gridziuska was travelling in, along with Paulius Paplauskas/Petrosas and Edgars Zelenousy, on suspicion that they had drugs in their possession. Zelenousy was driving the car when it was pulled over. The O’Farrell family understand the gardaí asked the men to get out of the car, searched them and then got Zelenousy to switch with Gridziuska, resulting in Gridziuska being behind the wheel. Zelenousy had no insurance. The car was then waved on.

Following Shane’s death, Gridziuska was arrested and appeared in court on August 4, 2011. Gridziuska’s numerous suspended sentences were not activated and gardaí did not object to him getting bail.

Eight days later, he was found in possession of heroin.

At his trial in February 2013, he pleaded guilty to failing to stop, report or remain at the scene of the crash but was acquitted of dangerous driving causing death. Judge Pat McCartan gave him an eight-month suspended sentence on February 28, 2013, on condition he left the country within 21 days.

But this condition was never met because, on March 6, 2013, Gridziuska appeared in Carrickmacross District Court for insurance fraud and was jailed for five months by Judge Sean MacBride in relation to three policies of insurance fraud, one of which covered the day on which Shane was killed.

Gridziuska’s trial finished on February 28, 2013. The insurance fraud file was submitted to the DPP the very next day, on March 1, 2014.

An Taoiseach can meet someone from outside this jurisdiction, yet cannot meet families of injustice in his own country. He has failed his people. I understand there is going to be a full Dáil debate on the [Maíria Cahill] controversy next week. I sincerely hope that he also holds a Dâil debate on the killing of our son, Shane, due to Garda failure.

I understand, the Taoiseach promised that the Minister for Justice, Frances Fitzgerald, is going to contact her counterpart in the North, David Forde, to discuss cooperation in handling the [Maíria Cahill] issue. I also hope she also contacts David Forde to discuss how a Lithuanian heroin addict could be given a suspended sentence in Newry, go on to kill our son two weeks later, and then, six weeks after killing Shane, get another two weeks in custody in Belfast.

30 thoughts on “Receipt Of Indifference”