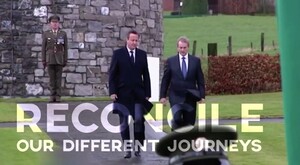 Not a mention of the rebellion leaders and participators that were executed or wounded or the lives, widowed wives, poetry and legacy. No mention of The Citizen Army, the IRB, The Nation, Cumann na mBan, Home Rule, Redmond, Kilmainham, Shefflin, Kevin Barry, Austin Stack, Roger Casement, the previous rebellions of 1798, Parnell, Wolfe Tone etc.
This IS the “Gathering Part II” as feared by our historians. The people that put this together have been given a brief that is so far removed from the 1916 Rebellion that allowed it to be made it into a faux-bollywood movie all about making MONEY. Jay-sus. I really had hopes.