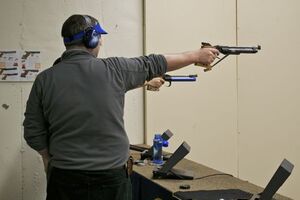 Further to planned new restrictions on gun ownership in Ireland.

An honest attempt to reduce the number of firearms?

Or a deliberate attempt to demonise licensed firearm owners  –  farmers, hunters, paintballers, vets and sportspeople – all of whom “are personally vetted and signed off by the Gardai themselves?

Let’s start with the basics: Yes, ordinary people in Ireland own firearms for perfectly good legal reasons. Vets, hunters, farmers, target shooters in a dozen sports including the Olympics, paintballers, race officials, even the guy who maintains the birdscarer at Dublin Airport. There’s about a hundred thousand of them and it’s been that way since at least the 1850s.

What’s the law today? Firstly, this is not America. We don’t have a second amendment and we don’t want it. If you want a firearm, you apply for a licence from the Gardai. There are several tests before you get the licence, which in essence are:

Those tests get checked six ways from Sunday (and no, you can’t get a licence for a firearm for self-defence and you never could). The Gardai have enormous latitude for refusing applications or revoking existing licences when there is any concern for public safety, and applicants have to accept a large number of conditions when applying for a licence – giving the Gardai access to their homes for inspections of gun safes, access to medical records, character references, and so on.

There are competency requirements for applicants so you don’t have untrained people owning firearms, and there is a strong culture surrounding firearms ownership in Ireland regarding safety and training.

By and large, the design of the legislation isn’t bad. It served perfectly well for almost forty years without a single amendment. Today the fine detail is a mess because we have over twenty
Acts, two EU directives and over forty statutory instruments all layered on top of one another and all of which must be read together to figure out what the current law is. That’s a long way from clear and the Law Reform Commission and High Court Justices alike have called out for this to be fixed for over a decade.

What are these proposed changes and why are people annoyed at them?

They’re not annoyed at *all* of them. Some are actually things that have needed fixing for a while and nobody has a problem with those; others have to do with tidying up problems that arose from the palimpsest nature of the law, and no one has a problem with those either (we’d like much more of that). The parts causing the fuss are:

1. Changes to the tests for licence applications adding unreasonable reasons for refusal

This sounds like a technical change; unfortunately it’s not, it’s just petty. Gardai have in the past resorted to making things up when refusing applications (despite having enormous powers to just refuse an application if there are any real grounds to do so). Reasons like “I don’t like the look of this” or “If I give him a licence, there’ll be an increase in firearms in my district” were looked at in literally hundreds of legal cases and District, High and Supreme Courts alike all
said “Oi, quit taking the mick, that’s not in the act”. This change is looking to put those reasons in the Act to sidestep the Court rulings.

2. A ban on all semiautomatic centerfire rifles

This has been put forward under the banner of banning “assault rifles”. First things first – assault rifles are things like M-16s and AK-47s. You can’t own them in Ireland, they’re fully automatic. You can’t own them anywhere in the EU except with the direct special permission of your government, which means if you’re not in the police or the army, you don’t get one. And that’s how it should be.

There are target shooting rifles in Ireland that look like assault rifles, if you squint. There are about a dozen of them and they’ve been here for years without ill effect. They’re strictly controlled already, which is why you’ve not seen breathless reports in the tabloids about them. And there just isn’t any reasonable ground to ban them. Not to mention, “looks like” is dodgy ground for a law to be on.

Not only that, this ban wouldn’t hit just those dozen rifles – it’d hit thousands of hunting rifles as well, which have been in the state for decades. There are good reasons for their existence and banning them by accident would be daft… but it wouldn’t be the first time that’s happened.

3. A ban on all shotguns that could hold more than three shells

When you think of a farmer with a shotgun, most people think of a double-barrelled shotgun. And they’re right, it’s the most popular kind. But the second and third most popular kinds of shotgun in Ireland are pump-action and semi-automatic shotguns; the former because they’re inexpensive and reliable, and the latter because they allow rapid follow-up shots when hunting duck and pheasant. For decades, these have been legal as long as you had the magazine of the shotgun altered to only let the shotgun hold three shells, usually by having the tube crimped or a plug put into it, and everyone was happy with that.

This proposed change would mean that the shotgun will have to have come from the factory with a magazine that can’t hold more than three shells; tens of thousands of existing shotguns would suddenly become illegal until and unless new parts are available, bought and fitted. In many cases, that won’t be possible – they just don’t make the parts.

Nowhere in the document does anyone explain why a system that’s worked since the founding of the state is suddenly insufficient despite literally hundreds of thousands of licences having been granted over the years for shotguns like this without any problem.

4. A ban on all pistols except those “designed for use” in the Olympic Games

This one’s the doozy. Let’s be clear about pistols first – they’ve been in Ireland since they were invented. For hundreds of years, long before the state was founded. There was a thirty-year gap during the troubles when licences weren’t issued, but that was not the normal state of affairs. And there are very few pistols licenced at the moment compared to other firearms – less than 1% of all firearms licenced in Ireland are pistols. It’s a few target shooters – you can’t licence a pistol for anything else in Ireland – who are all personally vetted by the Gardai. It’s purely for sport, and we happen to do very well internationally in the pistol sports. That’s the current state of play.

The proposal is to ban everything other than pistols on a “whitelist” maintained by the Department of Justice. There are purely technical problems with that: – Someone has to maintain such a list.

Pistols are like any other manufactured good in that new designs come out and old designs retire. Maintaining that list will not be a one-off job, and keeping track ofevery smallbore pistol design and judging which meet the criteria and which don’t would be almost a fulltime job. I’m a fully qualified ISSF judge who’s been target shooting for twenty years, I’ve run equipment control for a few international pistol matches, and I certainly

couldn’t make a call like that just by looking at a brocure from the manufacturer, I don’t see how an untrained civil servant, with the best will in the world, is going to do any better. The Department of Justice would have to buy firearms to test them if they wanted to do this properly, which is expensive and time-consuming and demands expertise.

– The list is meant to be pistols “designed for use” in the Olympics, but most pistols are designed for use in a lot of other sports as well because of the nature of manufacturing economics. Like a Ford Focus, you can get a pistol like the Hammerli Xesse in several different variants, mostly with cosmetic changes between them. For a beginner in the sport, this is perfect – the pistol costs six or seven hundred euro instead of the three to five thousand euro the pistols used by Olympic medallists cost, and they can try several Olympic and non-Olympic shooting sports to find out which they’re best at. Ban those beginner pistols and you’re banning not only a dozen non-Olympic sports, but you’re strangling the Olympic sports as well.

– The ban is suggesting a large-scale ban and confiscation of fairly expensive pistols which happen to be people’s property, and the report is very explicit about seeking legal advice that says compensation won’t be necessary, but you can be sure people will be testing that advice in court so it could wind up costing not only a few hundred thousand in compensation but also a few million in court fees becuase it’s likely to get to the Supreme Court if it goes that way.

But leaving aside the technical problems, there’s the root cause of the fuss:

– There’s no reason to be doing this at all.

The report, when it tries to justify the ban, immediately starts talking about mass shootings, and lists off several of them, and the Minister has listed others when talking about this report in the media. Both the report and the Minister however, have been very, very quiet about the enormous differences in firearms legislation between us and everyone else (we have the strictest firearms laws and the smallest number of licences firearms in Europe) and the sheer unlikelihood of such a tragedy happening here — you’re a bit more likely to be hit by lightning while being attacked by a great white shark (spoiler alert for anyone watching the next SyFy film).

The report also goes on to say that they’ve seen gun crime committed by drug gangs and because the Gardai didn’t recover the pistols used, or because the serial numbers were filed off the pistols they did recover, they couldn’t say that those pistols were not licenced pistols that had been stolen. Well, I can’t say that those pistols were not the personal property of Donald Trump either, but somehow I don’t think the Commissioner would swear out an arrest warrant for him on the basis of that. Which is fine by me, but I would have thought you’d need evidence to change legislation too…

In fact, quite a lot of us think that it’s almost as though the report was written in inflammatory language deliberately to demonise licences firearms owners in the media so any counter-argument would be painted as a bunch of American NRA gun-nuts demanding to be allowed to walk down Grafton street with an M-16 over their shoulder, instead of a collection of farmers, hunters, paintballers, vets and sportspeople, all of whom are personally vetted and signed off on but the Gardai themselves.

Yes, I know. The average person doesn’t care about the sport and if it’ll save one life why not ban everything? The problem is that a ban won’t fix anything. Drug gangs smuggle their guns in with their drugs, they don’t apply for licences for them. Banning sports is not going to solve the drug problem which is the source of our gun crime problem. Massaging statistics isn’t going to fix it, and blaming licences firearms owners isn’t going to fix it either.

Funding Gardai properly instead of closing Garda stations and freezing Garda recruitment, that’s how you fix the problem. Banning sports just gives the Minister a soundbite about “doing something”. It ticks off about a hundred thousand of us because we’re made into public scapegoats without any just reason, but it should tick off the other four million of us because we’re still at risk and the people who should be solving the problem are dodging it instead.

Previously: Out Of Our Cold Dead Hands

Scooby Doo: All Tooled Up

50 thoughts on “Leave Our Guns Alone”