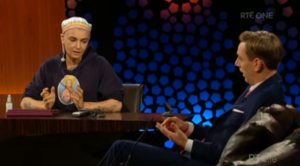 Further to Sinéad O’Connor’s appearance on last night’s Late Late Show, in which she mentioned that she had been shown footage of a woman being thrown to the ground by a guard during an Irish Water protest, she writes on her website:

“The un-named RTE employee who showed me footage yesterday of male Gardai throwing a woman into a concrete bollard during a water charges protest, and did so in order to request I ‘get on board’ with the subject, has been on the phone to me this afternoon begging I remove from my blog, the mention of his having shown me the footage as he is terrified he will lose his job because having shown me the footage (which has been in full public circulation for two weeks anyway!) prompted me to discuss non-violent revolution and the creation of a Second Republic of Ireland.”

“Needless to point out the utter hypocrisy of this person asking me to voice what he hasn’t the courage to voice himself. I requested he remove his cock and balls from the mouth of the state and have the same courage as I, to stand by one’s convictions.The very idea someone could be terrified they might be fired for showing me the footage says an awful lot about RTE. And Ryan says its not State TV? To quote Geldof “That’s a load of bollox”.”

57 thoughts on “‘He Is Terrified He Will Lose His Job’”