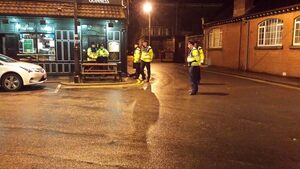 “We saw unconfirmable rumours on Friday evening (yesterday) on the internet that Enda Kenny was going to be attending a Fine Gael Function in Roscommon Town later in the evening. We phoned the pub and they denied that he was going to be there. A number of us decided to travel from around Roscommon to the pub just in case the rumours turned out to be true. We could not pass up the opportunity to let the Taoiseach know the strength of our opposition to his government’s anti democratic imposition of water charges.”

“We were thinking the possibility of his actually arriving was a long shot as the idea of Enda Kenny at the present moment turning up in Roscommon, where many people’s water is poisonous, and where he and local FG TD Frank Feighan are despised because of broken promises made about the local Roscommon Hospital A&E before the last election, seemed ridiculous. Around 25 of us gathered initially outside the premises. Eight of us went inside to have a drink, basically convinced that he wasn’t coming as there were no Gardai present.”

“Around 15 minutes later we realised that he actually WAS coming when we saw local TD Frank Feighan preparing to greet him. The minute he walked in the door we began to sing the anthem of the anti water charges protesters in Dublin in solidarity with them: ‘You can stick your water meters up your arse / you can stick your 100 euro up your arse’. Some of us also repeatedly told him that we did not want our water supply privatised and that it was time for him to go as his mandate to govern has disappeared. We were surrounded by Gardai and asked to leave and did so without any fuss.”

“We thought it fitting to protest Enda Kenny in a constituency where – according to the government’s plan – we will not be charged for the poison coming in to our homes – but WILL be charged for the privilege of having the poison taken away again. FG / Labour have been in government for years and many of us present have lived with the reality of constant ongoing boil water notices for those years.”

“We are also angry with the fact that this government are basically setting up a system whereby the ordinary people – many many of whom are living on the breadline – will end up subsidising the water supply of the privileged in our society with money they cannot afford. The water charges at base are a regressive poll tax. We also have no confidence whatsoever that in the medium term – if entrusted to the care of the present government – our water will remain in public ownership.”

“There has been criticism on national radio from Fine Gael public representatives of the manner of our protest. Our language may have been colorful – but our actions were entirely peaceful. Freedom of expression still exists in Ireland despite some members of our political and media elites openly wishing things were otherwise. We will continue to use it.”

Previously: ‘Get Out Of Our Pub’

Via Roscommon Says No

They See Me Rollin’, They Hatin’