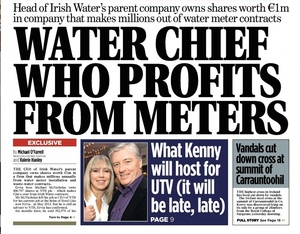 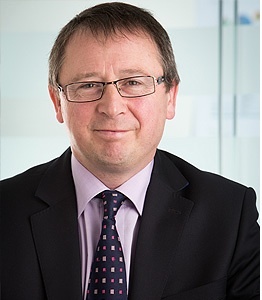 His interview followed a story in yesterday’s Irish Mail on Sunday [not online] which detailed how Mr McNicholas, the former CEO of NTR, has shares worth €1million in NTR, which makes €2million a year from Irish Water contracts.

It reported how NTR owns 50% of Celtic Anglian Water Ltd (CAW) which has contracts with Irish Water for meter installation and waste water worth €4million a year.

Readers may wish to bear in mind that, on July 27, 2012 – almost a year before Mr McNicholas was appointed CEO of Bord Gáis, now Ervia – the Sunday Independent reported Mr McNicholas saying: “The metering of Irish water opens up opportunities for Celtic Anglian Water. Celtic Anglian is well-positioned to provide those services.”

This is a transcript of what Mr McNicholas had top say this morning.

Cathal Mac Coille: “You have a connection still with NTR? First of all, in terms of shares, could you just tell us what the position is?”

Michael McNicholas: “OK, Gavin, let me first say that I have been, I am fully compliant with all the requirements of the code of conduct of Ervia in that I registered with the company my interest, and I’ve declared that I have shares in NTR, that NTR have an interest in CAW which is an operating company that has contracts, formerly with local authorities, now with Irish Water. And I have excused myself from any commercial contractual dealings with anything to do with CAW in the company which is what is required under the code of conduct so everything I’ve done is above board.”

Mac Coille: “What is your shareholding in NTR?”

McNichols: “Having said that, if I could just finish Cathal, I’ll come back to that, having said that, I did come on this programme last week and I said that one of the key issues for us is that we have not gained the trust and confidence of the public with regard to Irish Water and that was one of our key responsibilities. I finished with two words, which was that we need to build trust. And as group chief executive of Ervia, if there is any perception, no matter, no matter how misguided it is, that there is any perception of wrongdoing and the article did insinuate wrongdoing on my part, then I need to deal with that. So, yesterday, I spoke with NTR and I said that I no longer can sit on their advisory committee, even though it’s to do with renewable energy and it has no conflict whatsoever with my role in Ervia. I feel that’s no longer appropriate for me to sit on that committee. I do hold shares in NTR and they are restricted but I am divesting of those shares as a restriction is lifted. I am looking to see if I can accelerate the lifting of those restrictions to divest myself of those shares and, just to finish, my final point, any proceeds that come from the sale of those shares, we are, myself and my wife, as we always have intended, are donating the proceeds of those to Focus Ireland which has always been our intention.”

Mac Coille: “What is the shareholding?”

Mac Coille: “And you’re doing what you’ve told us, as a result of the Mail on Sunday story.”

Mac Coille: “Well why didn’t you do it before?”

Mac Coille: “Get rid of the shares, stop sitting on the advisory committee with NTR? I mean, sorry, I got the impression from what you were saying, just to be clear, that you’ve only taken those decisions in the last couple of days…”

McNicholas: “There’s only one decision I’ve taken yesterday and that is to remove myself from the investment advisory committee with NTR, even though there’s no conflict there. As chief executive of the company, it is incumbent on me to make sure that there is no perception of wrongdoing. The trust that we need to build with the public needs to be dealt with and, clearly, because of the article in the Mail on Sunday, there is an insinuation there that there may be wrongdoing and I need to..to be clear, the only issue, to be clear, is that I have made this decision on yesterday was to remove myself from involvement in the investment committee of NTR, where there is no conflict. All of the decisions in terms of the divestment of the shares, I have been doing anyway, will continue to do and it was always my intention to do that, and it was always my family’s intention that I would donate the proceeds of that sale to Focus Ireland.”

Mac Coille: “When will you start the process of divesting yourself of the shares?”

Mac Coille: “So you’ve shares effectively in, or you have had shares since you took over from, as you said, you’ve done nothing wrong in terms of Ervia’s code of practice but you’ve had shares in a company which is, has applied for and got, or one of its subsidiary companies applied for and got metering contracts and you’re advising that company. Would it not have been better, to say the least, not to have such a role. You can see the questions of conflict of interest arising.”

Mac Coille: “You mean that no contracts were given after you took over?”

McNicholas: “Absolutely not, absolutely not. And if there were, or there were any commercial dealings, I would not have had any involvement with them because that is the requirement of the code of conduct of the company.”

Mac Coille: “There is another possibility or a perception of a conflict of interest and that’s again obvious. Whatever business was done since you took over in May of last year, as head of Ervia and therefore of Irish Water, that you were advising a company which had dealings with your company. Now, explain to me how that can make sense?”

McNicholas: “NTR is a shareholder in CAW. My involvement with the investment advisory committee is solely and exclusively to do with any investments in renewable energy – solely and exclusively renewable energy and I was very clear from the outset that was all I could do and would do, because anything else would be a conflict of interest and therefore I would not get involved in it.”

Mac Coille: “It would, would you accept, that it would have been better if you hadn’t had such a role, given the interlinking of the two companies, from, in terms of public confidence?”

McNicholas: “Well, if you look at it, I felt that if I did everything that was required by the code of conduct that it would be exactly what I should do to adhere fully to my responsibilities. But yes I’m here this morning answering questions with regard to my role.”

Mac Coille: “As a result of a story in a newspaper.”

McNicholas: “Well, as a result of a story in a newspaper which implies things which are not correct and therefore I have to deal with them.”

How Maslow Can They Go?

Look Into The Eyes