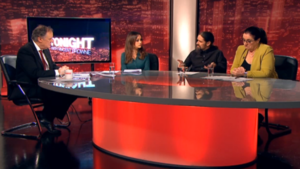 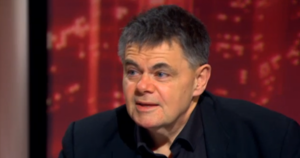 The panel of judges of last night’s Tonight With Vincent Browne Media Awards, top, and Sunday Independent columnist Gene Kerrigan, who won Columnist of the Year

The judges decided the story of the year was the series of Garda controversies as reported by Mick Clifford, of the Irish Examiner.

“[The Garda stories over the last year are] definitely would be the story of the year if it wasn’t a case that we’re now, as a nation or our Government is trying to put a lid on it and make it kind of seem all right and I would worry will we ever get to the root of it. Whereas the other story of the year would be water charges and the fact that it isn’t really about water charges, it’s about something else. It’s about layers of taxes that have come and I think that is now more the story of the year because I think something is actually going to happen out of it. Whereas with the Garda story, I’d still know people within the Garda Síochána who are absolutely terrified because of what they’ve told me and information that I’ve passed on. And bit by bit by bit by bit, [they’re] losing hope, that anything good will come out of it.”

After accepting his award, Mr Kerrigan gave his opinion about the changing landscape of the media in Ireland.

Gene Kerrigan: “It’s a matter of economics, the internet has come along and has destroyed a lot of what newspapers used to do without producing a way for that kind of journalism to be replaced. An awful of the internet is just opinion. The kind of thing that newspapers are very good at doing…It has its place but quite often, I would read something, every day, I try and wean myself off it…the stuff on the internet by people who are very, very passionate, and they get the basics wrong and they go off for 3,000 words of passion. You don’t get that so much, you do of course get it in newspapers, but you don’t get it so much because there’s an editorial structure which says, ‘this will bore the readers’. What we’ve got is one platform being undermined by another which isn’t in a position to take it over and do its job or isn’t in a position to do earn enough money, to monetise as they say.”