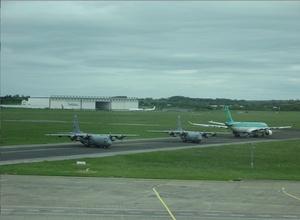 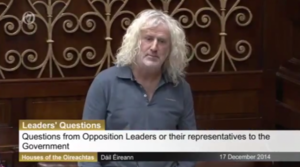 Yesterday, during Leaders’ Questions, Independent TD Mick Wallace raised concerns about the US military’s use of Shannon Airport in light of the recent CIA torture report.

During his exchange with Taoiseach Enda Kenny, Mr Wallace said a former US marine will come forward with information in the New Year.

Mick Wallace: “Although there is always much talk about transparency here, as under the previous Government, secrecy seems to be the order of the day. Last week, I asked the Taoiseach about surveillance being carried out by the British Government’s communications headquarters, GCHQ, on cables in the Irish Sea. I asked whether the Government had sanctioned it; if so, under what legislation; and if not, what it will do to protect citizens’ rights. The recent report on torture by the CIA also involves much secrecy around Shannon Airport. The US Senate’s report on the CIA’s use of torture has made little of American assurances that military aircraft passing through Shannon Airport do not carry military arms. The dogs in the street know they do.
Given the extent of the report, it is pretty clear that Shannon Airport has been used for rendition flights as part of the torture programme. Normally, when talking about something that happened on Fianna Fáil’s watch, as this did, the Government is jumping up and down to kick Fianna Fáil around. I am surprised the Government is not seeking to investigate this. Given all the information that has come our way regarding Shannon Airport, rendition flights and the CIA torture programme, does the Taoiseach not think it is time we had a full investigation into everything that has happened in Shannon Airport since 9/11?”

Pat Breen: “Where is the evidence?”

Joe Carey: “There is no evidence.”

Pat Breen: “The Deputy tried his investigation when he jumped the fence.”

Niall Collins: “The Deputies opposite are very quiet. Do they not represent Shannon at all over there?”

Joe Carey: “The Deputy should stay off the runway.”

Enda Kenny: “The Ministers for Justice and Equality and Foreign Affairs and Trade have been in touch constantly with the authorities from the United States in respect of rendition. Deputy Wallace will appreciate that this matter has been the subject of discussion in this House many times in recent years. I am unsure as to the kind of full investigation he is talking about. Clearly, the relationship between the United States and this country, no more than many other countries, deals with those issues. If the Deputy is suggesting the Government is not being told the truth about every flight that goes through Shannon, I would like to hear some evidence of the Deputy’s proof of this. He states that every flight was carrying arms and weapons.”

Wallace: “I did not say they all were.”

Richard Boyd Barrett: “He said “some””.

Kenny: “The Deputy might explain to me what sort of investigation he is talking about, because there have been claims about this in the House on many occasions previously. They all were investigated and down-to-earth—–”

Kenny: “—-and all of them were discussed in the House in respect of the truth of the matter and transparency.”

A Deputy: “The Taoiseach means the Government asked the Americans.”

Kenny: “Perhaps Deputy Wallace has some information I do not have.”

Wallace: “I have plenty of information about it.”

Wallace: “WikiLeaks has revealed a considerable amount in the past couple of years regarding the same subject. Amnesty International also has done so.”

Breen: “There is no proof Deputy.”

Wallace: “If the Taoiseach thinks not enough information has been brought forward already, I expect to have a former United States marine come forward in the new year who has passed through Shannon on a regular basis. He will give evidence to the fact that Ireland is in breach of international law in respect of things that have gone on in Shannon and how the United States has used the place.

Wallace: “Given the assurances the United States has provided to different people around the world about what it does and does not do and given the extent of the CIA torture programme, has it any credibility left in this area? Since the events of 11 September 2001, the United States has completely contravened human rights law. It has abandoned it and has lost its moral value in this area.

Carey: “It is torture being in here listening to the Deputy.”

Wallace: “The murder of innocent civilians in foreign countries is illegal. Unwarranted surveillance of the Irish public is illegal in this State. Is the Government really serious about doing things differently than its predecessor? I ask because some transparency is needed on this entire area.”

Barrett: “Sorry Deputy, you are over time.”

Wallace: “If Members bring more evidence to the Taoiseach in the new year, would he consider establishing an independent investigation on what has gone on at Shannon?”

Kenny: “I thank Deputy Wallace. He asked whether the Government will do things differently than before and he has evidence of this even within the past fortnight. On foot of the new information that came forward in a recent television programme, as well as other documentation, the Government made a decision in respect of reopening the case with regard to what are known as the hooded men where torture was involved. Obviously, as Deputy Wallace is well aware, that original decision had implications for other cases around the world. I do not have any information about the former member of United States marines of whom the Deputy speaks but if that person is coming forward and is making available information of which the Government is not aware, obviously it will be happy to hear that information from the person involved. Moreover, the Minister for Foreign Affairs and Trade will take that up directly with the American authorities. Last week, I dealt with the question of the cables, their ownership, the requirement for High Court judges and the fact that unwarranted surveillance is not legal and clearly, the Government would take a serious view of that. Of course, there is the question of major companies requiring information to be had or in issues of criminal activities where, under conditions, that information can be made available. Our country always has tried to measure up to the highest standards in respect of international law and if Deputy Wallace’s contact has information that is not available to the Government, the Department or to the authorities, the Government will be glad to hear it in the new year.”