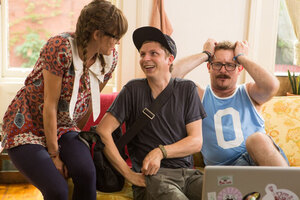 1. A small town girl dreams of fame but is unwittingly beaten to it by her dad after a video of him goes viral.

2. Another day, another indie flick with a kickstarter.

3. Director and producer David Cross wants to distribute the film via BitTorrent and GooglePlay having been inspired by Thom Yorke and Louis CK.

4. It’s Cross’ directorial debut. His uncertain career has let us enjoy the best of times and also the worst of times. This film looks somewhere in between.

5. The good news is he was able to pack it will his talented buddies  Matt Walsh, David Koechner, Michael Cera and Jason Ritter so there is hope.