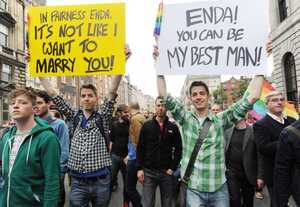 The 2012 Noise for Marriage march in Dublin

The wording of the May same sex marriage referendum. The Cabinet met this morning to discuss the referendum along with one on reducing the age limit for presidential election candidates from 35 to 21 years of age. No exact date has been given for the vote.

“We have made great progress towards equality based on the generosity and fairness of the Irish people and we are confident that we can appeal to this sense of generosity and fairness once more. The proposed wording would ensure that existing marriages and future marriages of men and women are not altered in any way. The proposed amendment would update the Constitution to say that any two people can marry, regardless of their sex. This wording rightly emphasises that the intention is to extend marriage ‘without distinction’ as to the sex of the spouses, thereby removing the last roadblock to the recognition in law of the full equality and dignity of same sex couples.”

“We look forward to a positive campaign for the referendum which focuses on the value of marriage to everyone in Irish society and explains why marriage matters to lesbian and gay couples. Irish people rightly take constitutional change very seriously and our job over the next four months will be to engage in a national conversation with the citizens of Ireland to understand and assuage any concerns, and to encourage people to have their voices heard on the day.”