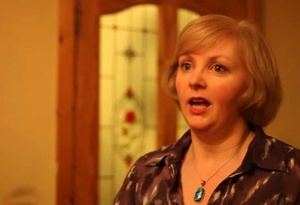 Mrs O’Brien, of the Iona Institute, was asked to share her thoughts on whether she objects to parenting (other than a same sex situation) where children are raised by family members.

Audrey Carville: “Breda O’Brien, for generations in this country, grandmothers have helped their daughters raise their children. Do yo do you object to that?”

Breda O’Brien: “No, and I think one of the really good…”

Carville: “Why, what’s the difference?”

O’Brien: “The reason that I don’t object to that is that our grandmother, helping out in a situation where…”

Carville: “Not helping out, raising. Living with the daughter, raising the child, what’s the difference?”

O’Brien: “The difference is that that doesn’t do anything to a child’s right to a mother and father. That’s actually the difference.”

Carville: “That child doesn’t have, in that instance, they don’t have access to their father. So what is the difference?”

O’Brien: “And we consider that a loss. We don’t normally legislate for…”

Carville: “What is the difference between those two people, raising that child and two lesbians raising a child?”

O’Brien: “The difference is that if a child has come into a relationship, where there are two lesbians, it has come usually by one of two means. One, from a previous relationship and the other is by assisted human reproduction. If it’s assisted human reproduction, it means that a child has been deliberately brought into the world without access to one half of her identity.”

Carville: “But what is the difference for the…”

O’Brien: “Because that doesn’t apply in the case of the grandmother..”

Carville: “…good of the child. The father in the grandmother scenario, the daughter’s partner, the man who fathered the child, he’s not, he’s never been there…”

Carville: “What is, no, what is the difference?”

O’Brien: “You can’t see the difference? Do you think we should change the constitution to allow grandmothers and their daughters to get married?”

O’Brien: “Do you think we can sort that out?”

O’Brien: “The difference is if we change the constitution, we are changing that mother/father model. A grandmother, raising a child with her daughter, does nothing to change that model because they’re not asking for rights to be married and to be considered exactly the same as a man and a woman who have brought a child into the world. A grandmother is helping out in a situation where there’s already a loss. Now let me just say, in a situation where the only parents that a child has are two people of the same sex, I think the provisions in the Children Family Bill for Guardianship are excellent, there are a lot of things which are not excellent which would be unconstitutional and I don’t object to that. But we don’t need to redefine marriage in order to achieve those rights, no more than we need to say that granny and daughter need to get married in order to raise the child.”

An earlier version of this post misquoted Breda O’Brien. Sorry.

88 thoughts on “This Is A Family Show”