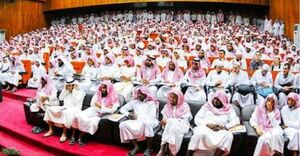 A conference on women’s rights held at the University of Qassim in Saudi Arabia last year.

Not one female delegate, what with the strict Sharia Law in force.

The picture above, which appeared originally in the Arab speaking newspaper Okaz, has been doing the rounds of the French-speaking press this week.

Sharia You Can’t Be Serious