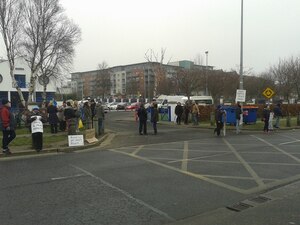 Outside Tallaght Garda station this morning.

Just had it confirmed that the young lad, who has just turned 16 a week ago, had approx 10 garda at his house arriving in 3 cars – they heavily banged on the door and made their way into the house, went up stairs as he got dressed and took him out.

122 thoughts on “While You Were Sleeping”