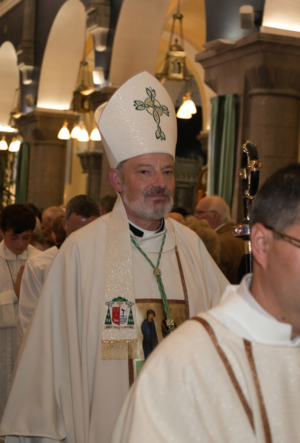 Bishop Kevin Doran at his ordination as Bishop of Elphin in the Cathedral of the Immaculate Conception, Sligo, last year

But enough about Joseph and Mary.

Bishop of Elphin Kevin Doran joined Chris Donoghue on Newstalk Breakfast this morning, to discuss the upcoming gay marriage referendum on May 22 and same sex parenting.

Grab a warm tay and a hot blanket.

Kevin Doran: “The term, ‘marriage equality’, which is being used a lot is misleading in the sense that what people are actually campaigning for here is not marriage because, by definition of same-sex relationship, includes some of the elements of marriage such as love, care, affection and perhaps a long-term commitment and so on. But it doesn’t include the openness to pro-creation which is one of the essential dimensions of marriage. And I’m not just saying that, from the perspective of the Catholic church or Christian tradition. I think if you look at cultures, older than any of the main religions, you find that part and parcel of the whole reason for marriage and for the reason for the State or, if you like, society getting involved in marriage was because it had to do with the important business of children.”

Chris Donoghue: “OK, well look, first of all, the referendum, we are not being asked about marrying our mothers or our sisters, the exact wording is ‘marriage may be contracted, in accordance with the law, by two persons without distinction, as to their sex’ but I just want to go back to church teaching because you have been, I think in that comment, and any gay person listening to that, will know that you’ve been friendly, you’ve been friendly and open in your comment. But what is the Catholic church’s view of gay people? Where do gay people come from or are some people just born, and they’re gay?”

Doran: “Well I don’t think the Catholic church is particularly expert on that, I think the jury is out. My own personal perspective would be, some people perhaps have a predisposition, genetically, to being gay. Perhaps, in some cases, people are gay because of contexts, circumstances related to their own experience of life as young people. One of the things I’d suggest also, from my own experience, as working as a university chaplain, would be that many young people in their late teens are confused about their sexuality, understandably and I think I’d have to say I was myself, and the thing about it is, some young people get drawn into a gay relationship because, some how or other, they don’t feel that they’re sure about being heterosexual, so they’re trying this out..”

Doran: “So there’s an element of that involved in it as well.”

Doran: “I did say that I’m not an expert on this but I made the point about it is, I think the jury is out on it. The reality is not so much about the way people are born as when you look at the meaning of human sexuality, it has both an emotional dimension to it and it has a very clear physical and biological dimension to it, which is oriented towards the generation of new life.”

Donoghue: “You see, because Bishop, what I’m getting at, in listening to the church on this debate is, the previous pope, Pope Benedict, said, in 2005, “homosexuality was an intrinsic disorder”. One of your peers, Bishop Aguilar in Spain, last year, said, ‘homosexuality is a mental disorder that could be treated’. I’m just trying to get at where the church is at, is it a sin to be gay?”

Doran: “No it’s not, no. It goes back to the kind of conversation you were having with Ivan earlier on, that sometimes technical, philosophical language is not the best way to communicate what we’re talking about. There’s obviously a difference between orientation and the way people behave and in reality, you see, what the church asks of people who are homosexual, by orientation, is exactly the same as what the church asks of people who are heterosexual, that they reserve sexual relationships to marriage. Now it’s a completely different question then to say that we believed marriage is between a man and a woman and we believe that this is not something that’s not just a religious view but it’s something that is part and parcel of what cultures, for thousands of years, have recognised as being important to society.”

Doran: “That would be to suggest that if some people who are born with Down syndrome or Spina Bifida, that that was what god intended either. I mean I think the thing about it is, I can’t see into the mind of god…”

Donoghue: “But the things you mentioned Bishop, to be fair, are conditions, they are disabilities, your sexual orientation is not a disability.”

Doran: “Well I’m not entering into that, I’m just simply saying that it would be wrong to suggest that everything that happens, happens because god intended it, I mean if that were the case, we’d be kind of talking about a very different kind of god to the kind of god that Christianity believes in.”

Donoghue: “Can we just be clear? Do you accept, Bishop, that May the 22nd has nothing to do with children? May the 22nd the referendum is about redefining marriage.”

Doran: “Oh no, I don’t accept that at all and the Government has been trying to pull the wool over people’s eyes, saying this, because what’s actually happening in the referendum on May 22, if it were to be passed, would be because there’s a redefinition of marriage, it’s also a redefinition of parenthood because, while the Government is currently putting through legislation, the Children and Family Relationships Bill, which redefines parenthood, that would still only have only the force of law but it would gain the force of the constitution in a referendum that would change the meaning of marriage.”

Donoghue: “But the referendum says nothing. The wording: ‘Marriage may be contracted, in accordance with law by two persons without distinction as to their sex.”

Doran: “Yeah, but you obviously haven’t heard what I’m saying. There’s an essential relationship between marriage and the giving of life to, and caring for, children.”

Donoghue: “What I’m saying is…”

Doran: “Ad so when you change the meaning of marriage, you change the relationships of parents because if children are now, to have say, two parents who are of the same sex, that…”

Donoghue: “But children do, Bishop. As in lesbian people, lesbians, gay men they are already parents..”

Doran: “They’re not parents. You see the point about it is…”

Donoghue: “But they are, all over Ireland. They have children.”

Doran: “They may have children but that’s the difference, you see that’s the point, people who have children are not necessarily parents. This legislation that the Government is introducing, the Children and Family Relationships Bill, seems primarily focused about making it possible for people in various different relationships to have children. It’s not about ensuring that children have their parents.”

Trap And Manuela Meet Off The Ball

181 thoughts on “‘People Who Have Children Are Not Necessarily Parents’”