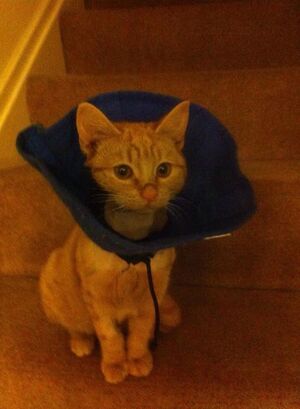 We had this little beauty called Apricot with us for surgery recently, referred to us from the ISPCA [irish Society for the Prevention of Cruelty to Animals]. Apricot had a salivary mucocele which is a condition in which saliva leaks from a damaged salivary gland or duct and collects in the surrounding tissues. It is three times more common in dogs than in cats so we have very rarely seen it. Although trauma is considered to be the usual cause for the damage to the duct or gland, it was impossible to tell in Apricot’s case.
She had a soft, non-painful, swelling located adjacent to the right salivary gland which caused her difficulty in eating and excessive drooling called ptyalism. The gland was removed and she made a full recovery, bouncing around and being cheeky in no time. She also landed on her paws as she was adopted by Aoife one of our students involved in her case…”

You Know What Happens Next

Lost A Phone On The Westport-Heuston Train?

Do You Know Conor Phillips From The Blanch’?

Have You Seen These Trials Bikes?