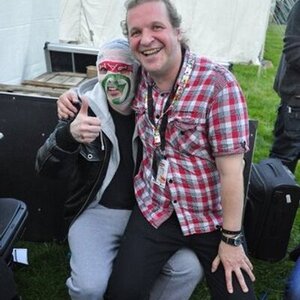 Joe Duffy (top) and Stuart Clark with a Rubberbandit (above)

In the wake of the accidental legalisation of certain types of drugs  Stuart Clark of Hot Press magazine went on Liveline on RTÉ One yesterday..

Joe Duffy: “I don’t know whether you heard Paulo Brennan a former member of the Fianna Fail National Executive at the start and he was saying the Government should use this loophole today to actually allow the re-opening of head shops, what do you think of that?”

Clark: “Well, I totally agree. One of the things that happened when Mary Harney banned them was that they went straight onto the illegal market. We did a survey two years ago, a thousand recreational drug users, and that was the case. I also feel that if the loophole remained open we would not probably see an increase in the number of people taking illegal drugs, and I say that based on Colorado, where marijuana across the board has been legalised since January the 1st, all the research, it’s fairly intense research, shows no increase in the use overall of marijuana, and the most liberal drug laws, where decriminalisation has been introduced in Portugal, again it shows that people aren’t taking the drugs they didn’t used to take, what they are doing is feeling more confident about going to their doctors or seeking mental help if they do have a problem.”

Duffy: “But places like Holland have restricted the sale of cannabis.”

Clarke: “This has been very much contested. It’s based on very small samples.”

Duffy: “And we all know what happened in Colorado was about money. “

Clark: “It’s not just that, Joe. it doesn’t help anybody who takes marijuana to make them a criminal even if you think marijuana is damaging, is it going to help them having a criminal record, they they can’t leave the country and go to America or Australia where we’re exporting people, but also for the rest of their lives they’re stigmatised, that can’t help anybody with a so-called drug problem.”

Duffy: “I think, I think, Stuart I think a lot of people would agree with you on the decriminalisation issue, but the opening of head shops, I think, is where people draw the line.”

Clark: “What was interesting was and with the greatest respect government drug policy is not really based on facts and figures, it’s based on tabloids and shows like yourself, no research was done, they were saying it was creating a new market, now I would say from the research that we were part of people going to legal high shops have been buying illegal drugs and they went back to buying illegal drugs, what we’re doing though is taking away the huge amount of money by common criminals.”

Duffy: “And the 110 head shops were simply replaced by back lane drug dealers?”