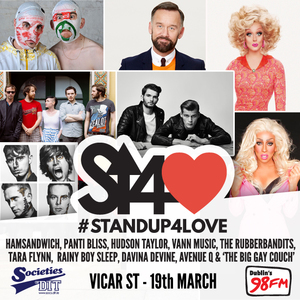 The ‘StandUp4Love’ event is on in Vicar Street  [Vicar Street, Dublin] TONIGHT.

A lineup of comedy, storytelling and music orgainised by Dublin Institute of Technology [DIT] students to raise awareness for a YES vote.

Confirmed acts include: Panti Bliss, Hudson Taylor, The Rubberbandits, Ham Sandwich, Tara Flynn, Rainy Boy Sleep, Davina Devine, Vann Music and ‘The Big Gay Couch’ hosted by Eoghan McDermott, where he will chat to Brendan Courtney, Anna Nolan and Panti Bliss about why a yes vote in May is so important for the LGBT community in Ireland. One of Ireland’s funniest and best-known comedians is confirmed as the host of the night and we will be keeping his/her identity a secret to surprise guests on the night! 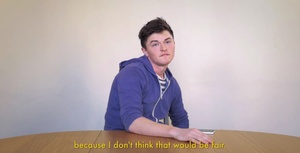