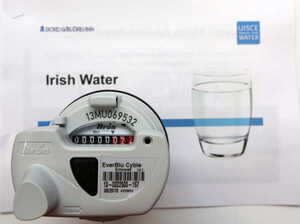 Water meter (top) supplied by Sierra (above), a subsidiary of Siteserv

Everything you wanted to know about the government’s priorities.

A lot of attention has been paid to the ongoing Siteserv controversy—but the implications for progressive politics have largely been missed in media commentary.

Siteserv is a construction services company that borrowed a lot from Anglo Irish Bank between 2006 and 2008 and accumulated a debt of €150 million. When the economic crisis struck, the government took over Anglo Irish and changed its name to IBRC.

The government (i.e., taxpayers) was thus made responsible for Siteserv’s debts and tried to get whatever it could out of those bad loans.

But instead of appointing a receiver to Siteserv to recoup those monies, IBRC let Siteserv handle the process themselves… and in 2012, Siteserv was sold to a company controlled by Denis O’Brien for €45 million.

A number of issues have been reported about the deal (although a full investigation has yet to be conducted).

First, Siteserv shareholders received €5 million from the sale. This is important because normally, shareholders, especially when they invested in a company that couldn’t even pay its debts back, are supposed to be wiped out before the creditors (in this case, IBRC). But here, taxpayers absorbed the losses.

Second, the result from the sale are as follows: shareholders got €5 million; state-owned IBRC got €40 million; and IBRC wrote off €110 million of debt it was owed by Siteserv—so the taxpayer took a hit of €110 million.

Third, it has been reported that there were other, more lucrative offers on the table for Siteserv that were rejected.

Fourth, Davy Stockbrokers and Arthur Cox solicitors acted for both sides of the transaction (Siteserv and Denis O’Brien’s company), which is not a transparent practice as it is difficult to obtain the best deal for the government when those overseeing the process simultaneously work for the buyer and the seller.

Fifth, the Central Bank of Ireland reviewed the deal just after it was finalised, but did nothing. The Irish Stock Exchange was also asked recently about a reported spike in Siteserv shares trading just before IBRC received bids from parties interested in buying Siteserv.

The Stock Exchange refused to comment, saying it was precluded from doing so on such matters.

Sixth, the government now wants to review the 2012 sale of Siteserv by using the audit firm KPMG. That is, even if KPMG was involved in the sale. In fact, so far, KPMG has been paid more than €70 million for its services in the liquidation of IBRC.

So asking KPMG to review itself is not exactly an instance of accountability. Indeed, Transparency International Ireland urged the government to remove KPMG from the review.

But our Minister of Finance, Michael Noonan, appointed a former judge to supervise KPMG in the review process. So, the plan is that a judge-reviewer will review the KPMG reviewer. It seems to be difficult to find an objective and neutral reviewer.

Seventh, in 2013, a year after it was bought by Denis O’Brien, Siteserv won several contracts to install water meters in Ireland (through its subsidiary GMC/Sierra). It was bad enough that taxpayers absorbed losses in the sale as stated above, but now Siteserv is benefiting again from the water charges.

A couple of points may be made about all this.

First, there have been accusations that the whole thing shows once again that the government is incompetent, mismanages everything and doesn’t learn from the mistakes of the past.

For example, Shaun Connoly wrote in the Examiner an article entitled “Incompetent Government will Bury the Controversy” in which he wonders if Enda Kenny “really not understands the laws of this country”? He also complains that we are faced with a “rotten system where nothing gets done properly and no lessons are ever learned”.

But the problem with this view is that it assumes that the government is actually trying to manage things properly for the common good, and that if only it could be more competent at doing so, things would improve.

However, in fact, the nature of the state is not to serve the people and to govern for the population as a whole.  This should be clear after a €64 billion bank bailout, a blanket guarantee making ordinary people responsible for €365 billion of bank liabilities, and six years of harsh austerity directed at the general population and the more vulnerable that has pushed the deprivation rate from 11.8% of the population in 2007 to 30.5% in 2013.

So by that standard government performance in the Siteserv deal is not too bad at all.

Siteserv shareholders have benefited. Denis O’Brien has benefited. Firms that have been paid fees to oversee the process have benefited. Taxpayers absorbed losses instead of private interests and bondholders, thanks to the socialisation of Anglo Irish debts.

And everything was kept quiet for about three years until one TD, Catherine Murphy, asked sustained questions—that’s not too bad, although in an ideal world, the deal would have been kept quiet forever.

Second, and related, how can we make sure this won’t happen again? UCD Professor of Politics David Farrell writes in the Irish Times that the controversy highlights “two major weaknesses in our political system”: first is “a Government that is not held adequately into account by parliament” and second is “a mindset that privileges secrecy over openness”.

Farrell’s solution is thus that “there needs to be a culture shift”, meaning that Ministers and civil servants “need to appreciate the principles that underline Freedom of Information—namely, to provide citizens with the information they deserve to know”.

Therefore, “instead of waiting behind closed doors” for information requests, the government should “simply put the information out there as a matter of course”.

The problem with this approach is that again, it assumes that if we could only convince those politicians to be more aware of the need for openness and transparency, things would get better.

It’s not incorrect per se, but the problem is that those politicians know very well that secrecy benefits them and those in power—that’s why they’re keeping things secret! Therefore, hoping they will change on their own won’t work.

So what are we left with? The way to change things is by redistributing economic and political power in society—that’s how you keep the powerful accountable, and in fact, that’s how you make sure nobody is too powerful relative to others.

If ordinary people had the same economic and political power as elites, there simply wouldn’t be too many elites around, by definition. A minority would not make decisions that affect everybody else’s lives.

Power would be decentralized, not concentrated in the hands of a few. In short, what we need is a drastic reorganization of power in society.

25 thoughts on “Giving Back To The Few”