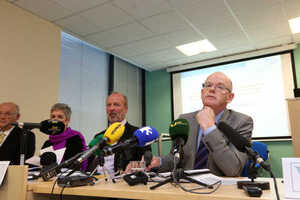 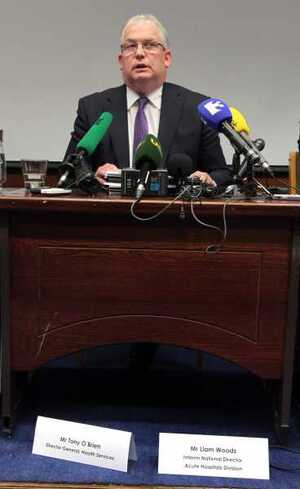 From left:  James Walker, Mary Dunnion, Martin Turner and Phelim Quinn at today’s publication of the Patient Safety Investigation Report into services at Portlaoise Hospital in the Health Information and Quality Authority (HIQA) offices, Dublin Tony O’Brien (above), Director General of the The Health Service Executive (HSE) at Dr Steevens’ Hospital this afternoon.

In Portlaoise Hospital, where a number of babies died in controversial circumstances, mothers and fathers received the remains of their newborns in a metal box on a wheelchair covered with a white sheet and pushed by mortuary staff.

In one case the box was not big enough and the dead baby boy was squeezed in, the Health Information and Quality Authority (Hiqa) revealed.

Another reported how hospital staff told her the practice [metal boxes] was in place to stop mothers becoming upset and others revealed how keepsakes of their babies were either not given back to them or returned incomplete.

A mother who lost a child but was reprimanded for crying on a ward with a medic telling her it would upset other mothers who had delivered healthy babies.In another instance staff avoided going into a grieving mother’s room after her baby had died.

Some said they were told their baby had been stillborn or died instantly at birth but documentation or reports obtained at a later date revealed conflicting information.

Portlaoise Hospital: Shock report claims dead baby was squeezed into metal box and given to parents (The Irish Daily Mirror)

Care Of The State

Grace And The Three-Year Gap

28 thoughts on “A Frightening Lack Of Empathy”