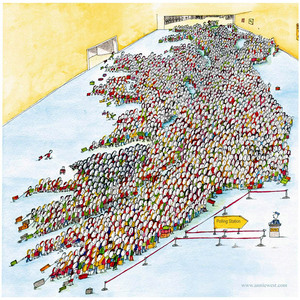 #hometovote, above, by Annie West

You may recall cartoonist Annie West’s Gathering print which adorned the back of The Broadsheet Book Of Unspecified Things That Look Like Ireland (New Island) and  was  later sold to raise money for Aware.

Last Friday – as Irish citizens living abroad arrived home to vote in the marriage referendum – Annie (artist by royal appointment) tweaked the Gathering print to turn it into a new print, called #hometovote.

Now she’s selling the #hometovote prints for €50 – with the proceeds, after printing and shipping, going to youth LGBT group SpunOut.ie

Breakfast With Annie And Amy

2 thoughts on “Home To Vote Souvenir”