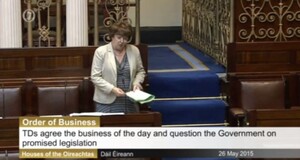 Independent TD Catherine Murphy attempts to raise concerns about the involvement of KPMG in the review of the Siteserv deal.

Catherine Murphy: “There is a motion on the Order Paper, No. 197, to which there are 45 signatories. Unusually, it has been signed by almost the entire Opposition. I am calling on the Taoiseach to consider allocating time for a debate on it. It concerns the review by KPMG of Siteserv and other issues. It was pointed out when we were debating the matter that there were conflicts or, at least, perceived conflicts with the individual who was to carry out the review.

Seán Barrett: “I am sorry, but we cannot deal with that issue on the Order of Business.”

Murphy: “There has been further damaged by virtue of the fact…”

Barrett: “Is time being allocated to debate the motion?”

Barrett: “I am sorry, but the Deputy cannot raise this issue on the Order of Business. Will she, please, resume his seat?”

Barrett: “Deputy Martin Heydon is next. I am sorry, but Deputy Catherine Murphy is out of order.”

Murphy: “The conflicts of interest are now greater than they were.”

Barrett: “The Deputy is out of order. Will she, please, resume her seat? She cannot raise this matter on the Order of Business.”

Murphy: “If there is to be a review and we are to spend public money on it and there is someone who is…”

Barrett: “The Deputy has a Whip. She can ask them to go to the whips’ meeting and arrange a debate.”

Murphy: “It seems that time should be provided…”

Barrett: ‘Will the Deputy, please, resume her seat?’

Murphy: “That there are 45 signatories on the Opposition side is no small matter.”

Barrett: “The Deputy can ask her Whip to deal with the matter at the whips’ meeting.”

Murphy: “I am asking the Taoiseach to consider allocating time to debate the motion.”

Barrett: “Will the Deputy, please, resume her seat?”

Related: Sanctions being finalised to crack down on disruptive TDs (Irish Times) 11 thoughts on “‘Deputy Murphy Is Out Of Order’”