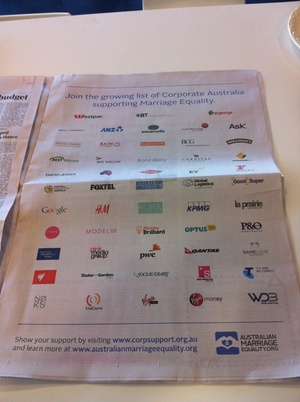 The fallout from the referendum continues apace. Some of Australia’s biggest and most iconic companies have taken out a full page ad in The Australian (the country’s somewhat right-wing paper of record). Also, [Chistine Forster] the sister of the conservative & religious prime minister believes that gay marriage will be legal by the end of the year and the leader of the opposition has been calling for a vote in parliament. This is a direct result of Ireland’s vote. Well done to everyone at home!

Where Is The Love?

17 thoughts on “Bruces and Sheilas Unite”