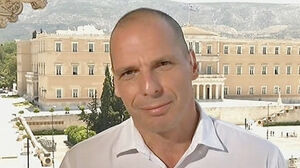 Into the eyes, not around.

Varoufakis, who resigned a week ago, has been criticised for not signing an agreement sooner, but he said the deal that Greece was offered was not made in good faith – or even one that the Troika wanted completed. In an hour-long telephone interview with the New Statesman, he called the creditors’ proposals – those agreed to by the Athens government on Friday night, which now seem somehow generous – “absolutely impossible, totally non-viable and toxic …[they were] the kind of proposals you present to another side when you don’t want an agreement.”

there was point blank refusal to engage in economic arguments. Point blank. You put forward an argument that you’ve really worked on, to make sure it’s logically coherent, and you’re just faced with blank stares. It is as if you haven’t spoken. What you say is independent of what they say. You might as well have sung the Swedish national anthem – you’d have got the same reply.”

There were people who were sympathetic at a personal level, behind closed doors, especially from the IMF.” He confirmed that he was referring to Christine Lagarde, the IMF director. “But then inside the Eurogroup [there were] a few kind words and that was it: back behind the parapet of the official version. … Very powerful figures look at you in the eye and say ‘You’re right in what you’re saying, but we’re going to crunch you anyway’.”

Varoufakis was reluctant to name individuals, but added that the governments that might have been expected to be the most sympathetic towards Greece were actually their “most energetic enemies”. He said that the “greatest nightmare” of those with large debts – the governments of countries like Portugal, Spain, Italy and Ireland – “was our success”. “Were we to succeed in negotiating a better deal, that would obliterate them politically: they would have to answer to their own people why they didn’t negotiate like we were doing.”

Anything Good In Metro London This Morning?

87 thoughts on “Ode On A Grecian U-Turn”