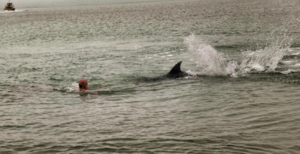 Fergus Finlay and Dusty the dolphin in Inis Oirr

The former Labour adviser was swimming around Inis Oirr harbour with his daughter and two grandchildren when the dolphin, known as Dusty, head-butted him full force in the upper thighs.

The dolphin was known for erratic attacks when she was in Co Clare, and since a move to Inis Oirr last year signs have been put up around the harbour warning swimmers to be careful.
“She came straight at me and sort of rammed me with her head into what I’d politely call my upper thighs and knocked me off my feet,” Mr Finlay told the Herald.