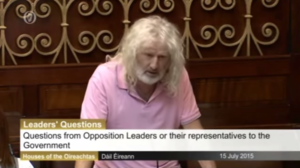 Yesterday, Independent TD Mick Wallace told the Dáil that he knew of a NAMA portfolio manager who sought a bribe of two installments of €15,000 cash “in a bag” from one of its debtors – to allow the debtor exit NAMA.

During the interview, Mr Jennings read a letter that Brendan McDonagh, the CEO of NAMA, had written to the Garda Commissioner Noirin O’Sullivan, in light of Mr Wallace’s claims.

“It’s my understanding that, under Section 19 of the Criminal Justice Act 2011, any party with evidence of criminal wrongdoing is legally obliged to bring such evidence to the attention of An Garda Siochana. In the event that the deputy [Wallace] is aware of such evidence and has not brought it to the attention of An Garda Siochana, it’s my understanding that this is a breach of Section 19.”

Mr Wallace told Mr Jennings that he found it “interesting that NAMA would like to shoot the messenger”. He also said he would be willing to speak to the gardaí – and name names.

Here is what Mr Wallace said in the Dáil yesterday…

Mick Wallace: “Yesterday, the Taoiseach said the Comptroller and Auditor General and the Committee of Public Accounts are the agencies in this jurisdiction for dealing with issues concerning the National Asset Management Agency, NAMA. We both know neither of them have the potential to fully hold NAMA to account. The legislation regarding the Comptroller and Auditor General does not allow for ongoing, intrusive oversight and monitoring and lacks asset management oversight functions. There are many concerns around the workings of NAMA.”

“Cerberus expects to make a large fortune from the purchase of Project Eagle. The £7 million that ended up in an Isle of Man bank account will begin to look like small change. The big loser, though, is the Irish taxpayer in the South. NAMA says the sale of Project Eagle was lawful, but was the purchase lawful? I would have thought that a Fine Gael Government would have a bit more concern about slush moneys for fixers. I doubt the Taoiseach has heard the last of Project Eagle.”

“Does the Taoiseach know how many barristers, judges, solicitors, top-four accountancy firm partners and bankers are in syndicates which have been set up by Goodbody Stockbrokers, Anglo Private, Bank of Ireland Private, AIB Private, Davy, Warren and Quinlan which have transferred to NAMA but which NAMA has not enforced, despite personal guarantees being attached? NAMA is responsible for some people being tossed out of their homes, but it looks like some of the great and good of Irish society are blessed with NAMA’s goodwill.”

“What role did a former Secretary General of the Department of Finance, John Moran, play in NAMA’s handling of the Coroin group’s portfolio? This gentleman remarked at one stage that the number of home repossessions in Ireland was unnaturally low. It would appear he was unnaturally interested in playing a significant role in the outcome of the Coroin group’s portfolio.”

“All is not well. I know of a construction company, Taoiseach, which wanted to exit out of NAMA, so it asked the manager of its portfolio if it could happen and he said, “Yes, but it will cost you €15,000 in cash and I want it in a bag”.”

An Ceann Comhairle Seán Barrett: “Sorry, Deputy. If you have these sorts of charges, can I suggest you give them to An Garda Síochána because they cannot be substantiated here?”

Eric J. Byrne: “The Deputy should go before the Committee of Public Accounts with this information. He is grandstanding here.”

Enda Kenny: “The Deputy has made a number of comments and allegations here regarding people working in different sectors, including members of the Judiciary. He made comments in respect of a former Secretary General of the Department of Finance, as well as comments generally in respect of NAMA.”

“Let me repeat again for him. The process of accountability and transparency in this jurisdiction in respect of NAMA is the Committee of Public Accounts in the Oireachtas, chaired by a Member of this House. Personnel from the Comptroller and Auditor General’s office work with NAMA and have access to all the papers and documents relevant to any of these transactions.”

“I would suggest that, as a public representative, the Deputy has a facility where questions can follow his allegations. He should go to Deputy [John] McGuinness’s committee, the Committee of Public Accounts, a committee of long-standing integrity in this House. The Deputy can make his claims, ask his questions. The Chairman of the committee, with his members, is entitled to call in personnel in respect of the issues the Deputy raised.”

“The Deputy has made some serious claims here. I do not have the detailed responses to them. The Committee of Public Accounts is the authorised independent entity in the Oireachtas for accountability and transparency in respect of NAMA. I suggest to Deputy Wallace that in the interest of public accountability and transparency, he goes to the committee, presents his findings and facts – if facts they are – and allow the Chairman and his committee to do their work in the interests of their political responsibility here.”

Wallace: “I can only come to the conclusion that the Taoiseach does not seem awfully interested in getting to the truth. There is a stark contrast between how Northern Ireland is dealing with this and how the Government is dealing with it.”

Creed: “The committee is in the North.”

Wallace: “Can the Taoiseach tell me why did Mr. Frank Daly tell the Committee of Public Accounts that he did not know about the alleged £7 million in the Isle of Man bank account until I mentioned it? I know for a fact that NAMA—–”

Barrett: “I am sorry, but this is Leaders’ Questions.”

Wallace: “—–knew this last January. What did it do about it? Did it tell the Minister for Finance or did it bury it with the rest of it? Mr. Coulter has denied the involvement of a politician. Well, he would, would he not? I decided to contact my sources this morning and ask them to what degree of certainty they could stand over the involvement of a particular politician. Their reply was, “Is 100% enough?”. The Taoiseach has serious problems. Does he want answers to them? Do not bother asking me, Taoiseach, to go to the Garda—–”

Barrett: “Sorry, but this is no way to be dealing with such a serious issue. The Deputy cannot use the Chamber as a Star Chamber where no evidence is presented. The Deputy is affecting people’s reputations here. He has not presented any solid facts.”