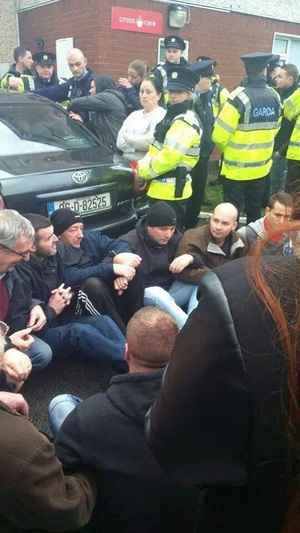 Paul Murphy TD (on ground second right) at a sit down protest during a visit to  Jobstown, Tallaght by Tanaiste Joan Burton last year.

Further to the decision by the Director of Public Prosecutions to charge over 20 austerity protestors for ‘falsely imprisoning’ the Tanaiste Joan Burton and an aide.

Paul Murphy TD, who may be among those charged following a dawn arrest earlier this year, writes:

The news that over 20 people will be charged with serious criminal offences in relation to the protest in Jobstown is shocking. Reports indicate that a number, including of people, including me, will be charged with false imprisonment – a charge that carries a maximum sentence of life in prison. This is an extremely serious attack on the right to protest.

People from Jobstown, who participated in a protest which delayed the Tanaiste for about two and a half hours are now facing the potential of going to prison. How many people does Joan Burton feel should be imprisoned because she was delayed for a couple of hours?

The question has to be asked about why this information was leaked to the media, via a crime correspondent [RTÉ’s Paul Reynolds], before people themselves were told they would be charged. Just as no Garda was in touch with me to question me before my arrest, nobody has been in touch suggesting that we would be charged, or charging us.

This will be a major political trial initiated on foot of political policing. It will be a trial of over 20 people for having the temerity to protest, including delay the Tanaiste, who is responsible for vicious attacks on working class people, including most recently the cuts to lone parents.

If the Labour Party thinks protesters facing potential prison sentences is going to in some way redeem itself in advance of the next election, it will be sorely mistaken. This may only add to the dramatic rejection that Labour will receive, particularly in working class communities like Jobstown, where people now have a deep feeling of betrayal.

The context to this move is clear – one of absolute crisis for Irish Water and the government. 57% of people have refused to pay the water charges, Irish Water has failed the Eurostat test and the government is reeling from this rejection of its water charges. This new attempt to criminalise protest and intimidate people from protesting will not work. It will inspire more to come out for the next national Right2Water protest at 2pm in Dublin on Saturday August 29.

Without Whom None Of This Would Be Possible