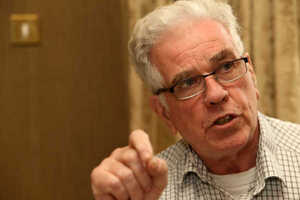 Cathal MacCoille: “You’ve been working with homeless people for over 30 years now – how do you characterise the current state of homelessness?”

MacCoille: “I’ll talk about the measures you’re suggesting in a moment but, in your view, why is it so bad now?”

McVerry: “It’s so bad now. The primary cause now of homelessness, of 90% of the new people becoming homeless is the private, rental sector. Their rents have gone through the roof. People can no longer afford them. We deal with, we’re dealing with one young man, he’s been renting for the last two years. His rent was €950. The landlord came along and said next month it’s €1,300. He went to the Department of Social Protection, asked for an increase in rent allowance and was refused. He will now, this month, become homeless. And the second cause of it is homes being repossessed by the banks – particularly buy-to-lets. When a bank takes over a buy-to-let, a tenant who rents that house gets turfed out. So I think that’s the primary cause and that has to be addressed. There are two problems in this, there is first of all the problem and it’s an enormous problem, of helping those who are currently homeless finding accommodation but the second problem, I think even more urgent is trying to prevent more and more people and more and more families floating into homelessness. We’ve got to take measures to prevent that.”

MacCoille: “And this is why you’re calling on the department of the environment to freeze rents, to stop the number… rather than help those who are homeless but to stop more people from becoming homeless, yeah?”

McVerry: “It’s one particular measure, it’s already too late for so many families to freeze rents and anyway it’ll have to pass through legislation and that’s going to take time. It’s one measure. I think there are other measures. We have to increase the rent supplement, there’s no question about it. The rents, nationwide, in the last three and a half years, have gone up by an average of €50 per week. In Dublin they’ve gone up by over €90 per week on average and the rent supplement has been reduced by 28% – there is just no correlation now between the rent supplement and the rents that are being demanded by the landlord.”

MacCoille: “How likely do you think it will be that rents will be freezed or rent supplement will be increased?”

McVerry: “Well there’s a number of TDs who are landlords and I don’t think they’re going to vote for it.”

MacCoille: “Have you asked the department?”

McVerry: “We have an emergency…”

MacCoille: “Have you asked the department, Peter?”

McVerry: “We’ve been calling for it, and so has Threshold, and so has Focus Ireland, and so has the Simon Community. We have been calling for rent freezes for ages. In November of last year the minister [Alan Kelly] said he was considering an emergency rent freeze. In February, he said he was going to do it – he actually said he was going to introduce emergency rent freeze. We’ve heard nothing since. That does not suggest to me like any sense of urgency in addressing what is a critical problem. You know the way the number of families are going, by the time the election comes around, in maybe six or seven months time, you’re gonna have 1,000 families who are actually homeless – there are not 1,000 hotel bedrooms available for 1,000 families, many of them are going to find themselves unable to access accommodation, it’s going to be in mid-winter and there’s an election coming up.”

MacCoille: “Have you spoken to Alan Kelly recently?”

McVerry: “I have never spoken to Alan Kelly.”

MacCoille: “Have you looked to speak to him?”

McVerry: “No, he hasn’t looked to speak to me.”

MacCoille: “Would you be willing to speak to him?”

McVerry: “Absolutely, I’ll speak to anyone.”

The Story Of Frank

91 thoughts on “Freeze The Rent”