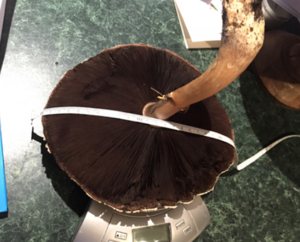 A giant mushroom found this week on the Great Western Greenway in Mulranny, Co. Mayo

The mushroom measuring 20cm by 23cm in diameter and weighing 189 grams was found by local doctor Jerry Cowley behind St Brendan’s Unit in Mulranny. Speaking to The Mayo News after his find on Monday, Dr Cowley said on first inspection he thought the funghi was a ‘large flat rock’…

Dr [Matthew] Jebb [of the Botanical Gardens in Dublin] said he could not find any evidence of a ‘record’ mushroom size for Ireland and told Dr Cowley that he could ‘unofficially claim that mantle’. The mushroom is currently in a large fridge at the doctor’s practice.

Dr Cowley is currently the chairman of the Great Western Greenway Landowner’s Committee, which has called on the Government to include the popular Greenway route where the mammoth mushroom was found, on the National Walks Scheme.
The inclusion would mean that landowners on the route would receive an annual renumeration for maintaining the walks for the public to use. The chairman sees the latest find on the popular route as ‘a sign that the Lord God Himself wants Michael Ring to meet with the committee and progress the case’.

‘That is one hell of a big mushroom’ (Mayo News)