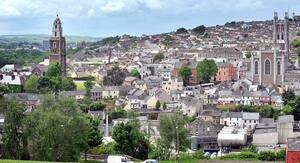 The proposed introduction of ‘unitary authorities’ – “two units of the lowest level of government” – for Cork and Galway – is a further assault on democracy in Ireland.

Forgive me for being parochial for once….

You may dismiss what follows as the ravings of one who clings to the delusion of a ‘real’ capital. If so move on. What I write here is in no way informed by the banter that makes up that mythological argument.

I’m angry. More angry than I’ve been about any political issue for a long, long time.
I see what is happening not only as an undermining of my own sense of place, but also having me question what faith, if any, we place on democratic values in this country.

Recommendations are being made in Cork and Galway that would see unitary authorities being established in both counties.

Put this into context. Cork county with an area of 7500 sq km, and Galway county at 6000 sq km, together are larger in size than Northern Ireland. Between them their area is the equivalent of the size of three European Union member countries – Cyprus, Luxembourg and Malta.

Their collective population is more than twice that of Iceland. And yet it is being thought sufficient that two units of the lowest level of government can administer areas of this size.

It’s something that I should have seen coming. During John Gormley’s tenure as Minister for the Environment, a Green Paper on local government was produced. I found it anodyne. It was written by civil servants in civil service speak. The verbs used – review, examine, investigate – were deliberately vague to justify any subsequent decision. Or no decisions at all.

After a further year a draft White Paper was given to us in the Green parliamentary party. As we were considering its contents Fianna Fáil ‘sources’ were briefing the media that town councils were to be abolished, something they then thought to be a good thing.

I was horrified. The thrust of Green policy in this area was to make democracy more diffuse. The proposal had come from civil servants within the department in pursuit of a long term policy agenda. I told John I couldn’t stand over that. It seemed to confirm his own qualms. The draft White Paper was withdrawn and was never published.

Another proposal in that discarded paper was that a unitary authority be established in Limerick. Only Limerick was mentioned. There seemed to be some logic in sharing workforces and administration, but why would Limerick have to lose its City Council?

When Phil Hogan became Minister he enthusiastically adopted his officials’ recommendations. Town Councils were abolished. Limerick and Waterford became unitary authorities. Regret was expressed, a regret that counted for nothing.

Later, without any sense of irony, Brendan Howlin mused that his biggest regret, during this government, was having to abolish town councils. The new Minister for the Environment (and Deputy Leader of the Labour Party) doesn’t seem to be deviating from his officials’ policy.

Indeed it has been Alan Kelly who has established the review groups for Cork and Galway. Groups that seem determined to deliver their pre-determined views to apply a further scalpel to local democracy in this country.

Brian O’Nolan (who as a civil servant worked at the Customs House for the then Department of Local Government) or his alter egos of Flann O’Brien and Myles na gCopaleen, could not concoct a more surreal situation, where the department he worked for wanted to bring about less local government.

52 thoughts on “A Local Column For Local People”