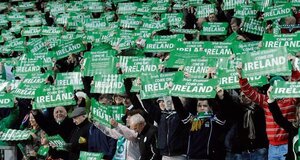 And more than one flanker.

Who will answer Ireland’s call?

Now that the Rugby World Cup is up and running, we can assess the health of the Irish squad, in a campaign that for many will be their last.

Full Back and Captain: E.C.B (Enda) Kenny
Kenny has been criticised for not leading from the front. He has seemed more inclined for others in the team to do his dirty work. More likely to surround himself with team members than operate under his own initiative.

Right Wing: Leo (The Lion) Varadkar
Leo will reliably hug the right hand touchline. If he could he would try to extend play even further to the right.

Inside Centre: M.N.M (Mourning) Noonan (Knight)
The veteran of the side. The jury remains out on whether he has over stayed his welcome. Annoys the rest of the squad with his constant singing of ‘There Is An Isle’.

Outside Centre: Brendan (Wolf) Howlin
Diminutive in stature he succeeds in making himself appear larger than life through puffed out self importance. The squad member most likely to come out of the dressing room last.

Left Wing: Alex (Smart) White
One of the more recent entrants to the squad. Not particularly comfortable in this position as he keeps crowding those to his right.

Out Half: Joan (Laporte) Burton
Being half out Joan bears the burden of Labour club mates in being misunderstood or miscommunicated by.

Scrum Half: Francie (Fitz) Fitzgerald
While new to this position Francie seems a better option than the predecessor in the role, Alan (Chatter) Shatter, whose wayward passes couldn’t be picked up by any of his teammates.

Open Side Flanker: Richard (Dick) Bruton.
Survived the experience of being turned down as captain by his club side. Survival seems his prime asset.

Number Eight: Simon (Air Apparent) Coveney
His natural height advantage is not made best use by conflicting management tactics that require him to either dig in, or fire salvos at the opposition.

Blind Side Flanker: Jan (Claude Can Damme) O’Sullivan.
Blind side had been seen as an ideal position for the Labour club member. However O’Sullivan has shipped most of the blame for a recent shock defeat by a team from the junior ranks.

Second Rows: Paschal (Theorem) Donohoe and Heather (Gloaming) Humphreys
Both automatic choices for being well hidden within the pack.

Loose Head Prop: James (Really) Reilly
Another whose position has been changed in the hope that he would carry the ball less.

Hooker: Alan (The Bull) Kelly
With an epithet earned more from poor temperament than physique, he seems to perform particularly poorly in waterlogged conditions.

Recently the team has been showing dangerous signs of complacency, believing their own training notes. It could succeed if an appropriate of humility were to be found. However, having disappointed consistently since 2011, it isn’t thought than a turnaround in performance is possible.