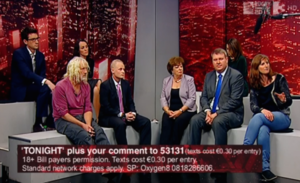 You may recall how NAMA sold its Northern Ireland €5.7million loan book – known as Project Eagle – to US investment fund Cerberus for €1.6million in 2014.

In July Independent TD Mick Wallace told the Dáil that £7million was found in an Isle of Man account following an audit of Belfast law firm Tughans – which was hired by New York legal firm Brown Rudnick to help Cerberus buy Project Eagle.

Mr Wallace claimed part of that  £7million was earmarked for a Northern Ireland politician or party.

On foot of these claims, the UK’s National Crime Agency and the US authorities are investigating the sale.

Readers will also recall how, yesterday during Leaders’ Questions, Mr Wallace told the Dáil that he was summoned to a meeting by a ‘public figure’ during which he was warned by a ‘leading member of Cerberus Ireland’ that he was ‘going to get sorted’.

Taoiseach Enda Kenny told Mr Wallace to take his concerns to a member of the Public Accounts Committee.

Last night, the matter was discussed on TV3’s Tonight With Vincent Browne.

Ian Kehoe: “I suppose Nama’s always been, I suppose, a state within a state. It’s almost impenetrable to find out exactly what’s been going on there. Part of that was out of necessity, part of it was that it was created so quickly. The position of Nama in relation to this and the position of the Government would appear to be and I think they’ve acknowledged privately that they have concerns around the buyer side, not around the seller side. And therefore, they’re the sellers, so there’s no worries. I don’t really think that’s good enough. I don’t think it’s likely. But I mean the Government set up a Commission of Investigation into the IBRC – Catherine Murphy did a lot of work on that – and again there was no real, full evidence, you know there was no documents linking it all back but they established that Commission of Investigation very, very quickly. Even with Michael Noonan saying – well, in the end, compared to what they’re doing here, Catherine – but with the Michael Noonan thing, we don’t think there was any allegation, any wrongdoing there. In this case we know that there was 7million pounds Sterling in an Isle of Man bank account, we know that one of the world’s largest private equity firms was asked to exit the initial race because of some allegations over third-party fixers. And the allegations keep on coming. Yet the position of the Government has been, and we also know it’s being investigated, should I say, and parts of it are by the FBI, by the US Department of Justice and by various authorities in Britain and Ireland. And yet the position in this jurisdiction has been, ‘there’s nothing to see here, folks’, ‘it’s somebody else’s problem’. I’m not sure that’s good enough because I think it damages Nama, as an institution, for them to be constantly questioned in this way. I think we should have a look at examining what went on.”

Catherine Murphy: “There’s a culture of secrecy and that’s part of the problem and that’s the way Nama was set up. But this culture of secrecy within the political system as well and they’ll  just try and bat this away and hope that somebody like Mick Wallace, or myself when it was the IBRC, will stop making a nuisance of ourselves. The reality of it is with both Nama and IBRC, this Government accelerated the sale of these distressed assets at a point where property values were coming up and where you would have had an entitlement to get more: that’s an issue in its own right. That the public have an entitlement..”

Murphy: “Absolutely huge issue. And it’s the people’s money that they have done this with and the only purpose that seems to be served on that is that they can say at the end of the day, ‘oh we closed it up two years earlier or three years earlier’…”

Murphy: “Yeah, huge, huge losses that are public losses and, in terms of the secrecy, last year I had the same problem and earlier this year when I was looking for even replies to parliamentary questions on IBRC. I was told, Michael Noonan went on the radio and he said, that I could always apply through the Freedom of Information Act. Well I applied through the Freedom of Information Act in the same family of things in relation to IBRC last May. I was due a reply to that in June. It was batted ahead until July. I’m still waiting and I’m now preparing to go to the Information Commissioner to make a formal complaint. That is the kind of behaviour that we’ve come to expect – batting it into a committee – and I think Mick is right on this, batting it into a committee is trying to kind of move it over to a sideshow and actually not deal with the issue at hand. And they’re very serious allegations that have been made.”

12 thoughts on “Nothing To See Here”