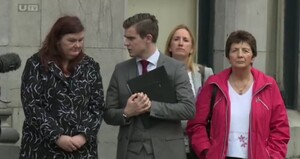 Ms Doherty told Mr Delaney that the politician who is alleged to have interfered in the case is still alive and that their suspect would confess if questioned.

Niall Delaney: “Mary Boyle, as you know, has been missing 38 years, last seen in Cashelard in Ballyshannon, in March, 1977, yesterday her twin sister Ann went to a Garda station, identifying, she claims, the person that she believes murdered her sister all those years ago. She handed in a formal statement to gardai in Pearse Street in Dublin, claiming the gardai, that she’s begged gardai to take certain actions down the years and she’s been frustrated in her efforts to find Mary’s remains which she believes are buried somewhere in Cashelard in Ballyshannon.
She rejects suggestions that Mary was snatched by a stranger, she says that’s ridiculous. The journalist Gemma O’Doherty accompanied Ann Boyle to the garda station yesterday, she’s been reporting on the case. And Gemma O’Doherty is on the line now, journalist with Broadsheet.ie. Gemma you’ve been following this case. Well you’ve been part and parcel of this case. You were at the garda station yesterday with Ann Boyle, isn’t that right?”

Gemma O’Doherty: “That’s right, yes. There was a very important development in the case of Ireland’s longest missing child Mary Boyle who vanished from her grandparents’ farm near Ballyshannon on March 18, 1977, aged six, and has never been seen since.”

Delaney: “Ann is adamant that she knows who was behind Mary’s murder.”

O’Doherty: “Ann is adamant and she’s adamant her twin sister was killed by somebody known to her. And yesterday Ann was joined by the country singer Margo O’Donnell, who also made a lengthy statement to the gardai in Pearse Street Station in Dublin, alleging the identity of the killer and also alleging that she believes that the gardaí have not investigated this case properly. Both of them pleaded with An Garda Siochana yesterday to arrest the individual that they believe is responsible for Mary Boyle’s disappearance and murder.”

Delaney: “OK, but why, why now? I mean Ann has had 38 years to go to the gardai and identify this person she believes is responsible or has she done that already and has she been ignored?”

O’Doherty: “She was six when she lost, what she calls, her other half. The person who knew her thoughts, who said the same things as her, the person she adored, her little twin sister. So I think to say it was 38 years, it was only in adulthood, when she started to put things together, after all of the trauma that she had endured as a child, that she started to see that it was impossible for a random stranger to stroll onto the bogs of Donegal and snatch her child and she has had a lot of time to rethink this. But more importantly, through the years, as an adult, she has gone to the gardai, she has spoken to them, she has asked them to hear her concerns and she has faced a brick wall on every occasion. She certainly is utterly disillusioned with the gardai in Donegal. As are members of gardai in Donegal who were there at the very start. Very decent, honourable officers who tried to bring Mary’s killer to justice. But were not able to and one of…”

Delaney: “Some of whom…you’ve been talking to some of them, Gemma?”

O’Doherty: “I certainly have and one of them in particular has made a very serious allegation that in the days after the murder that there was political interference in this case.”

Delaney: “That’s huge. I mean if that goes public, that there was political interference of any sort in an investigation as important as this..”

O’Doherty: “Well it is public now. I published it yesterday on Broadsheet and it is also now in the hands of a number of TDs who will be pursuing this. And yes I have been informed, as have Ann Boyle and Margo O’Donnell, and a number of other individuals that there was political interference and a politician interfered to an extent that certain individuals were not to be considered suspects in this case which is truly shocking because we are talking about the murder of a child.”

Delaney: “Absolutely. We can’t push it too much for obvious reasons but would that politician still be alive…”

O’Doherty: “I know that, and I completely trust the opinion of the senior gardai that I’ve been working with on this case. But also Ann and Margo and other peopled familiar with the situation and it is their belief that if the killer was brought in and properly questioned, that a confession would be forthcoming. And they believe that this individual has never been questioned properly.”

O’Doherty: “That is their belief and certainly not arrested. So again, one has to wonder, I mean, certainly I believe if we were living in a normal democracy that individual would have been brought in last night given that allegations of murder have been made against them. And we see the sort of carry-on that is going on in this country at the moment where people who protest on the street have gardai arriving all hours of the night and day to them. So we’re talking about the most serious crime of all: the murder of a child, an innocent child and yet, here we are 24 hours on nearly, and I certainly haven’t heard about any arrests and we know that a few months ago an individual was arrested in relation to this case who, it would appear, had absolutely nothing to do with it.”