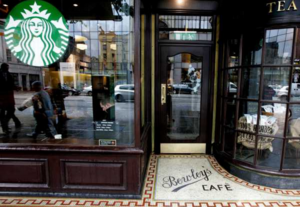 Further to the death of a homeless man outside Starbucks on Westmoreland Street, above, early yesterday morning…

“Gardaí believe he had been dead for a number of hours and revellers who passed him in the early hours of Sunday may not have realised he was dead. Garda sources said because the remains of the 10 victims of the fire at a halting site in Carrickmines required postmortems by the State Pathologist’s Office, it could be several days before the cause of the man’s death was established. However, they said one line of inquiry was that he might have died of a drugs overdose.”

“The fatality is the second among the homeless community in the city centre in the past fortnight, with another man who had been sleeping rough off Dawson Street in the south inner city found dead on September 25th.”

Meanwhile readers may also recall that, on the evening of Tuesday, October 6, the group Inner City Helping Homeless reported that one of their service users died earlier that morning from pneumonia.

This would indicate three homeless people have died in 17 days.

Previously: ‘He Died Of Pneumonia’

A Death In The Green

34 thoughts on “‘Revellers May Not Have Realised He Was Dead’”