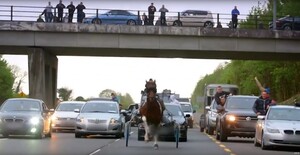 This Thursday on RTÉ2 at 9pm

A one hour documentary [directed by Martin Danneels] “offering a unique insight into one of Ireland’s most fascinating sub-cultures”.

Scorned by media and the mainstream, Ireland’s Sulky Racers care deeply about their ‘coloured’ horses; yet they race on the wild side, illegally, on Sundays at dawn, on dual carriageways blocked off to traffic. The sport and the personalities that drive it have never before been the subject of a television documentary. Until now.

These passionate horsemen race their light-weight traps – sulkies – at startling speeds. When one owner challenges another, his horse’s reputation is at stake. So too are thousands of Euro.

Following a group of owners and drivers based in counties Dublin, Meath, Clare and Limerick, Ireland’s Sulky Racers shows the extremes that these complex and compelling individuals will go to in order to prepare their piebald for race day. 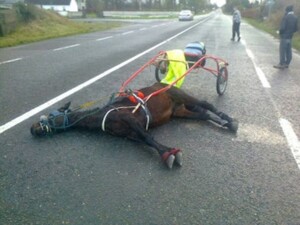 Killed By The Human Race

53 thoughts on “Chariots Of Ire”