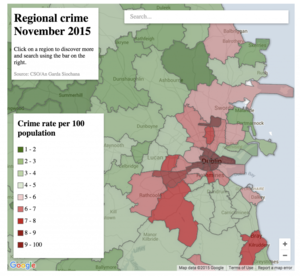 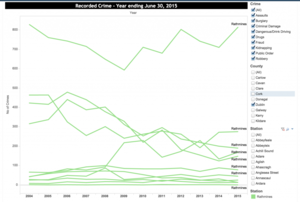 Seán McCárthaigh, of the Ireland edition of The Times ireland Edition, has created an interactive Neighbourhood Crime Survey by taking data from the Central Statistics Office, tracing the crimes to back to the country’s 563 garda stations and mapping the results.

“While there have been widespread reports of increasing crime in certain areas, local crime rates have been difficult to establish. The survey used Central Statistics Office (CSO) data, but traced it back to each locality, allowing users to see whether recorded offences have risen in their city, town or village and to see a breakdown of the specific crimes committed.

“The analysis showed noticeable drops in crime in some areas, including Mayo, Westmeath and parts of northwest Dublin, such as Blanchardstown, Finglas, Cabra and Ballymun.”

“Mapping the data has also identified several crime hotspots in the past year. Recorded crimes were up at a majority of garda stations in south Dublin, particularly those in middle-class suburbs.”

The English Times We Live In

9 thoughts on “True Crime In Your Area”