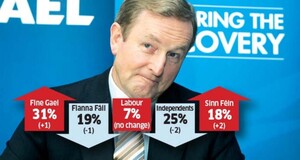 On Sunday, the Sunday Business Post carried the results of a Red C poll, showing support for Fine Gael was up a point this month to 31%.

Other news outlets reported the results of the poll with RTÉ reporting, “At 31% it’s the highest level of support for the party since 2012.”

Every media interview, every piece of campaign literature stuffed through your letterbox, every speech, every canvass; politicians in all parties are supposed to follow the template decided by headquarters. “Message discipline” is one of the political buzzwords of the age. Roughly speaking it means that everyone in the party should say the same thing all the time.

For Fine Gael that means talking about the economy and the necessity for stability to sustain the recovery.

Sinn Féin is up two points today to 18 per cent and is set to make significant gains at the election, but like the independents, it has declined over the last 12 months.

As the economic recovery has gathered strength, and as austerity has ceased to be the central fact of Irish politics, those parties and independents which made opposition to austerity their central political message have seen their support eroded. When you think about it, that’s what you would have expected.”

“For some time, Red C has championed the theory that a significant proportion of those currently claiming they will vote for Independent candidates, may simply be using this option to hold fire on where their final loyalties might lie. They are torn between anger at austerity and the broken promises they believe this government has made, and the reality that the parties they voted for at the last election are still probably the safest bet for not rocking the boat over the next five years.”

“Our prediction was that, as voters moved closer to the realities of an actual general election, they may well start to shift back to the government parties and away from their claimed support for Independent candidates.”

One man polled by Red C expressed concerns on Facebook late on Saturday night, as the poll’s results emerged in media outlets.

He wrote wrote on Facebook that he felt the phraseology used during the questioning was biased.

I was one of the people surveyed for this and I was shocked at how biased the phraseology used was. Questions like “given how much the economy has improved, would you risk voting for another party?” followed on from being asked to rate how much my financial situation has improved under the current Government. I stopped the questioner halfway through to ask who commissioned the survey but he wouldn’t tell. At the end I asked for a phone number for Red C to ask who commissioned the survey. So I called up and queried it and I was told they would call me back but they didn’t. At least now I know it’s the Sunday Business Post. Interesting.

However, after this man contacted Red C yesterday, and discovered the questions he was concerned about were not included in the SBP coverage, he requested that the post be removed.

He was informed by Red C that some of the political questions he was asked were commissioned by a “private individual”.

Broadsheet contacted the Red C and this was confirmed.

Get To The Chopra

29 thoughts on “Nothing To C Here”