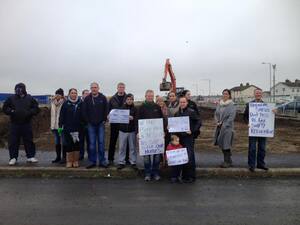 You may recall how yesterday Labour TD Ann Phelan explained that a new policy directive will give the chief executives of Dublin’s four local authorities the power to “dispense with the normal Part 8 planning process” – or public consultation process – for any situation they deem to be an emergency in regards to homelessness.

“Work has stopped on the site where the first set of modular homes are to be located in Dublin due to a protest.”

“Around 20 people have gathered at the entrance of the site Balbutcher Lane in Ballymun.”

“They say the modular housing project puts plans by a local co-op to build 40 social housing units on the same land in serious doubt.”

If the current protest being held at the Baile na Laochra Modular Homes site in Poppintree, Ballymun continues, 22 families will remain in unsuitable accommodation in commercial hotels for the Christmas and into early 2016.

The four Dublin Local Authorities, An tArdmhéara Críona Ní Dhálaigh and the Peter McVerry Trust are asking the protesters to stop obstructing building works on the site and enter into constructive discussion with Dublin City Council.

The contract was awarded to Western Building Systems following an Accelerated Restricted Procedure (ARP) to provide homes in recognition of the extreme urgency to respond to family homelessness in the Dublin region.