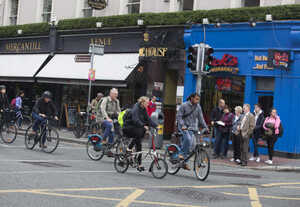 “As with the two previous indexes, this year offers surprises. Copenha­gen and Amsterdam continue to dominate, but new cities storm into the top 20 at the expense of others. Buenos Aires stomps the competi­tion and nails the South American continent, at the expense of Rio de Janeiro, which seems to have lost interest. Europe continues to have a strong presence, though Germany is slacking—Berlin falls, Munich slips off the list entirely, and Hamburg is hanging on by a thread.”

The third Copenhagenize Design Company’s Index of bike friendly cities. The top 20 out of 122 are presented at link below.

Choosing substandard infrastructure along the quays is not exactly the way to go. The bike-share program rocks, but now a comprehensive network and bicycle strategy should be developed and followed to the letter….

The 20 Most Bike Friendly Cities On The Planet (Wired)

11 thoughts on “Race To The Bottom”