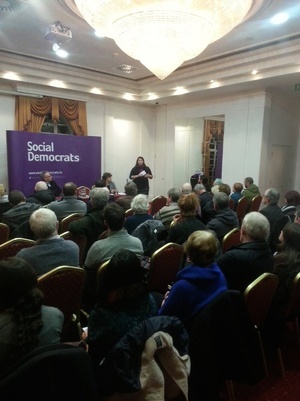 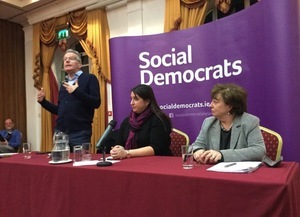 In the fight against corruption in Irish politics It’s them versus us.

How do we do things differently? That is the question I posed to a room full of people in Lucan last night as I hosted a public meeting on the topic of corruption in Irish public life.

From 1974’s Commission of Investigation into the Dublin Monaghan Bombings, through the 1980’s phone tapping scandal and Kerry babies scandal, on into the 1990’s plethora of scandals ranging from the Beef Inquiry, the Mahon Tribunal, the Flood Tribunal, the Ansbacher scandal and a host of others I don’t have the word count to mention.

Then we move through the noughties with Haughey/Lowry/Ahern controversies, FÁS expenses, Moriarty Tribunal, now the Cregan Inquiry and blah de blah de blah. We could pretty much map out the political history in Ireland by making a timeline of the corruption scandals that have hit the sitting administrations of the day.

And that’s before you even count in the lower level, yet no less significant, stuff happening at local authority level, town council level and even community level. My point is corruption and malpractice is pretty much endemic in our system. It’s not a new feature and it’s certainly not something that we should be inexperienced in dealing with.

Yet here we are in the height of confusion about how we should proceed with the [Justice Brian] Cregan Inquiry [into certain IBRC transactions].

Before Christmas I attended a meeting with An Taoiseach in the company of Catherine Murphy TD and other political leaders where Mr Kenny belligerently told us that he didn’t know what the opposition expected. That’s easy, they expect what every right minded citizen expects; answers. Not a range of excuses and legal impediments and a Taoiseach making them feel like they are creating hassle and being an inconvenience by seeking those answers.

He then went on to defend the practice of obliterating the information from any other avenue one might pursue, otherwise known as redacting. It’s telling that the term ‘redacted’ has entered the common lexicon of Irish citizens under this administration. Answers, in any format and through any channel are not this Governments’ desired option. Imagine that.

The truth that is being sought at this time, and in all those other scandals named above, and the ones that will never come to light doesn’t change. It always involves citizens having been disenfranchised and exploited in some way and being left in the dark about who, what, why and invariably how much, they have been exploited by.

And almost more importantly who benefitted from that exploitation, because someone always does and the odds are you’ll find them in the same group of names we tend to refer to as the ‘Golden Circle’. This sense of ‘them vs us’ was palpable in the room last night.

Nobody trusts that Enda and the lads really want you to know why €119million of your money was written off by the board of IBRC when Denis O’Brien managed to acquire Siteserv at a time when he owed the same bank – and by extension, you, the citizen, hundreds of millions of euros.

Or why other huge transactions including Blackstone or Topaz were conducted in the way they were resulting in hundreds and hundreds of millions of euros being taken from the taxpayer while significant, let’s call them ‘net worth individuals’ benefitted.

A political system that doesn’t have the trust of its citizens can no longer be regarded as democratic and in the year we will hold glitzy commemoration ceremonies for the heroes of 1916 who battled to establish a democratic Republic, that’s more than ironic, it’s plain tragic.

Anne Marie McNally is a candidate for the Social Democrats in the forthcoming General Election. Her column appears here every Wednesday. Follow Anne Marie on Twitter: @amomcnally