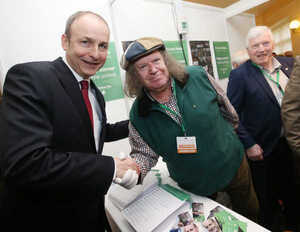 The party’s director of elections Billy Kelleher described [last year] anything more than 35 seats as a major achievement.

Under new Dáil arithmetic, with the number of TDs elected reduced from 166 to 158, a government would need 79 seats to get into office. Fianna Fáil leader Micheál Martin is ruling out coalition with Fine Gael or Sinn Féin, leaving his party well short….

The party’s Seanad leader and Dublin spokesman Darragh O’Brien said Mr Kelleher was merely asked what would be a good result.

17 thoughts on “And I Not Knowing No Focal At All”