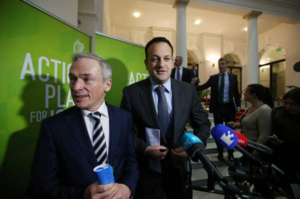 Minister for Jobs, Enterprise and Innovation Richard Bruton and Minister for Health Leo Varadkar at an Action Plan For Jobs event in Government Buildings this morning

“I really wouldn’t like to see a Government that’s dependent on any Independent. Because if we’re back to that, we’re back to the kind of parish pump deals that existed in the past. Fine Gael has never actually engaged in them, only Fianna Fáil has historically and, of course, the last time Michael Lowry was involved in such a deal it was with Fianna Fáil. And there are a number of Independent TDs who have issues with the law including Mr Lowry, but others too. And I’d hate to see a Government dependent on somebody not having to be in court or, potentially, being in prison.”