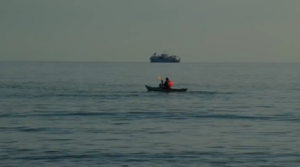 “Broadsheet published a link last summer as Jon and Sean were attempting to paddle around Ireland starting from the Old Head of Kinsale.”

“They returned to the Old Head 39 days later, having survived huge Atlantic swells and covered in blisters. The trip was self-supported so Jon and Sean carried everything, including food and camping gear, in their kayaks.”

And What Are You Doing Today?

Crossing Ireland In A Kayak Latest