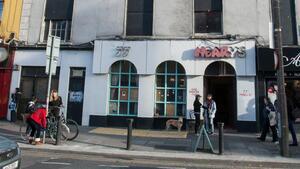 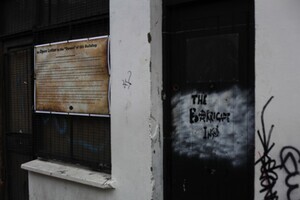 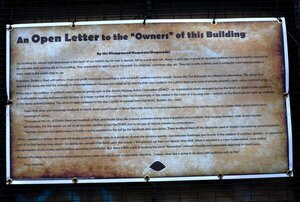 This building was laying vacant and abandoned in the heart of our capital city for over a decade, left to wreck and ruin. About a year ago, a group of squatters entered and spent months renovating the premises and restoring life to the building. They proceeded to open the premises to the public for meetings, workshops, gigs, etc. They ran a café, a library and a computer room and provided a space open to the public, free to use.

Elsewhere, Dublin is filled with glittery shops and profit machinery breathing in and out profit-seeking machine people. Spaces like The Barricade Inn offered an alternative. The group that opened this space also had the audacity to challenge Ireland’s housing crisis head-on by placing their own bodies in the politico-legal grey zone of private property rights versus common sense.

Following in the tradition of political action taken by groups such as the Dublin Housing Action Committee (DHAC) – an organization which emerged during the 1960’s to tackle similar problems of unaffordable housing and perceived injustices as a large number of properties then too stood empty in the capital in the midst of a housing crisis – activists at the Barricade Inn took up residency in the newly opened building. The same struggle continues to this day. I quote an excerpt from the DHAC, Bulletin No 1, 19691;

“Laws that allow and encourage landlords to knock down sound houses or leave them idle during a housing emergency are immoral, and the courts and judges that uphold them are in contempt of justice.

“Throughout the city of Dublin there are hundreds of flats and houses lying idle (vacant possession being more important and profitable than housing families) while 10,000 families are homeless. For this reason we call on all homeless families to join the DHAC and to occupy all vacant private accommodation...

“The high increase of property value in Dublin is being exploited to the full by the landlords and speculators. These landlords feed off the desperate need of Dublin’s homeless for accommodation…”

What is needed is a change. We need not simply crush the rentier class, as a gardener crushes the common garden snail between forefinger and thumb in the creation of a perfect garden… as appealing and all as that fantasy may sound – to destroy the parasite that feeds upon the masses – the problem we face runs deeper than that. What is required is a more fundamental, more radical reorganisation of our society and its politico-economic constellation. But there is little point in evoking the word “Revolution” without concrete and reasonable objectives to stand upon.

Perhaps affordable housing or innovative cultural space within our city is such a reasonable objective… I mean, what else is going to be done with buildings such as this?

24 thoughts on “Beyond The Barricade”