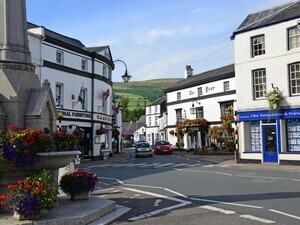 Last week my itinerary took me to a picturesque small town/large village, Crickhowell, in south eastern part of Wales. Going around this country I get to see many pretty villages. I had come to Crickhowell to learn about its recent brush with notoriety.

Local businesses had come together to examine how collectively they could become a legal entity to avoid paying Corporation Tax, as multi national corporations have succeeded in doing for decades.

It is an idea simple in its inception yet so brilliant in its potential. This self styled Fair Tax Town can, and I believe will, become a beacon for a wider Fair Tax movement.

As someone Irish witnessing this phenomenon I can’t help but to admit some slight feelings of ambivalence.

Over the years, at Green meetings in Europe, I had always argued that Ireland needs to be considered a special case. An island nation at the periphery of Europe, a creative corporate tax policy was our attempt to counter the competitive disadvantage of not being part of the European land mass, in having lower distribution costs by being closer to the largest population centres.

And I believed it. In the way that many of us come to believe in the myth of Irish exceptionalism.

Being a World leader in the practice of tax tourism, Ireland could create a short cut in manufacturing national wealth figures that held as little depth as the paper on which they were written.

Many corporations now have Ireland as their mailing address. Their presence isn’t without some advantages. Access to certain industries have become fast tracked, new skills and technologies have been acquired in larger numbers.

And yet there could have been, and may yet be, a better type of industrial policy for Ireland. One that takes longer to bear fruit in terms of tax receipts but would be more sustainable, more rooted in our infrastructure, more capable of withstanding the whims of the global economy.

Here’s an idea. Let’s use the taxation system to develop a distinction between the types of corporations that exist from those who physically make things to those trade in services. Exempt those who make things. They build up our manufacturing capacity. Tax service industries who by their nature are ephemeral.

This is where a Robin Hood Tax could come into play. Designed as a tax on financial transactions, it could just as easily be applied to trade in intellectual properties. Of course it would need to be international in its application.

The OECD is at present engaged in an exercise seeking to bring about a level playing field in relation to corporation tax. It’s a fruitless exercise. The mobility of capital makes it impossible to secure the tax liability of multi national corporations. Their liability can only be enforced through an international mechanism.

In phasing out out the Double Irish tax loophole, Ireland is starting slowly to move away from its reputation as a tax tourism locale. Our reputation could be better improved if we were to contribute to an honest international debate on fair tax.

50 thoughts on “A Tax Is The Best Form Of Defence”