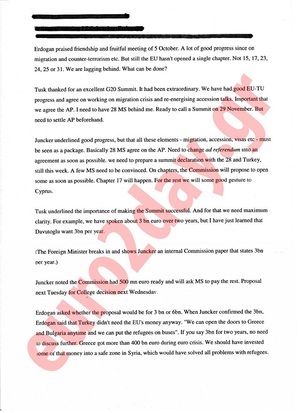 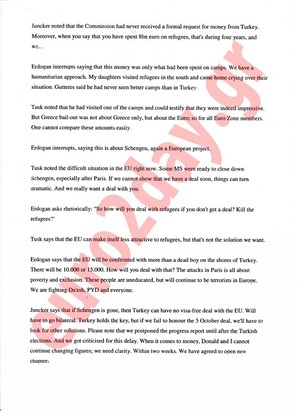 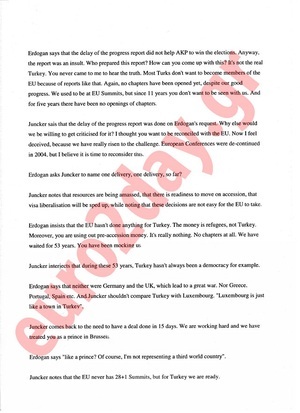 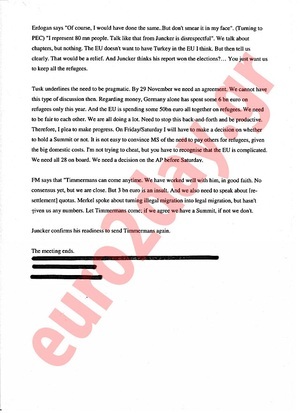 In return for €3billion, visa-free access to Schengen zone countries for the citizens of Turkey and a speeding up of the process of allowing Turkey into the EU, Turkey promised to stem the flow of refugees travelling from Turkey to Greece.

Last week it was revealed that Ireland will be giving €22.9million to the so-called Turkey Refugee Facility.

Before this deal on November 29, 2015, there was a meeting between the European Commission President Jean-Claude Juncker, Turkey’s President Recep Tayyip Erdoğan and President of the European Council Donald Tusk.

Leaked minutes of the meeting have been published by Euro2day.gr and purport to show at least some of the negotiations between the three men.

They discussed, among other things, the Schengen project, Turkey becoming a part of the EU, support for this among the EU member states, and the amount of money Turkey should receive to curb the number of refugees leaving Turkey’s shores.

“We [Turkey] can open the doors to Greece and Bulgaria any time, and we can put the refugees on buses.”

A 12-kilometre fence was built along Turkey and Greece’s land border in 2011.

In addition, the minutes state:

“Erdogan says that the EU will be confronted with more than a dead boy on the shores of Turkey. There will be 10,000 or 15,000. How will you deal with that?”

Meanwhile, it’s being reported that 33 people drowned off the Turkish coast this morning as they attempted to reach Lesbos island.

12 thoughts on “‘We Can Bus The Refugees To Greece’”